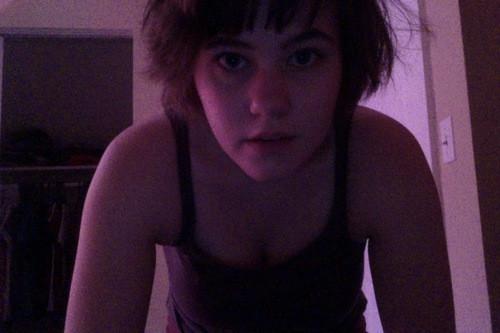 Friends, pleasant discoveries are everywhere. What was thought to be an empty pocket, contains loose change. A normal day at the park reveals a new squirrel friend. And so it was with Kimberly Walters. Fumbling about on the expanse of the internet (like a bumbling nincompoop), I discovered her writing. And so far, having read her twitter for the last couple months, and her new book, Killer, I really like all of it. To put it bluntly, as H.L. Mencken once said of a sandwich he was eating, “this shit is fucking awesome and if you don’t agree, fuck you.” Kimmy’s writing is funny, innovative, very well constructed, and TURNED TO 11 at all times. It’s where land meets water, where peanut butter meets jelly. It’s the very last moment your lips are touching before they open up to laugh. You feel me? So I sat her down to discuss just what the hell is up.

Sam Pink: Can you tell me a little bit about how you got started. Like, some meaningful events along the way.

Kimmy Walters: In high school I took an independent study of poetry mainly because I wanted to go to the library and take naps instead of listening to words in a classroom. I had to write 40 poems to get class credit and I remember coming across Mark Leidner’s blog and discovering that there was actually poetry out there that I did like. I wrote the 40 poems and they were probably bad because I was sixteen. A few years later I accidentally accumulated a lot of followers on twitter and started discovering more writers I liked and started discovering better ways to express my thoughts etc. Over the past few years my boyfriend has been encouraging me to write and convincing me that I am not terrible at it. He read your book Person to me on the day we met.

SP: Oh cool about your boyfriend. Glad to see that you gave him second chance hehe. How has how you approach writing different from when you first started. I feel like a lot of the process is slowly removing hidden ‘rules’ and freeing yourself up. Did you notice that at all during the progression from 16 yr old you to present you?

KW: I think when I was 16 writing a poem was an intimidating task because I felt the poem had to “do” something, but I wasn’t really sure what that thing was. A poem doesn’t have to do anything, and it definitely doesn’t have to define What Love Is or anything huge and weird like that. It’s lower pressure and ultimately way more human to write about smaller things I think. I agree that removing hidden rules is a lot of the process. It’s why teens write a lot of the worst poetry (I certainly did). Ask a toddler to dictate a poem to you and that poem will be fucking great, because they don’t have any notions about what a poem is supposed to be. And then the rules descend. I never tried to write Old English-y sounding sonnets or anything, but I definitely did write about love and darkness and stuff. Then…slowly…I realized that it was possible to write free verse about a car crashing through the front of a 7-11

SP: In terms of form, most of the pieces read like prose poems. Has this always been what you gravitate towards? Are you trying any other techniques?

SP: So do you usually start with a context. Or like, how does a piece begin? Is it a scene? An idea? Some of your stuff has an ‘Aesop’ feeling to me which I really like. Meaning, you set up a quick scene and then provide some kind of pronouncement, though usually a personal/subjective one.

KW: To some effect they may be “what I’ve learned” or something. But I also love fake stuff. So a lot of them are just me playing around with what is/could be true. I feel like if they’re pronouncements they’re made from the top of a rock in the park while I wear the pajamas the kid from Where The Wild Things Are wears, with the crown and tail

SP: Can you talk a little bit about the importance of humor in your work. A lot of it is really funny but in a way that seems tempered by a larger sadness.

KW: I’ve spent a large portion of my life with fairly severe depression and anxiety, and my sense of humor is one important factor in tricking myself into remaining alive this long lol

KW: This is a fairly common coping mechanism for sad people I think. Like if you have to live in a hole, you’re going to decorate it, right? I don’t remember when I learned that everyone’s brain is not constantly scrambling to produce tiny moments of amusement in order to prevent them from jumping off a bridge. I was maybe 20.

SP: Yeah definitely, I like the hole thing. I’ve always thought of it as ‘taking pictures as you fall down the pit.’ Do you find that humor, as a coping mechanism, is just that, to cope, or does it provide something more complex. Sometimes humor can be a diversion but sometimes it can reveal something, I feel, deeper.

Humor has very much influenced my worldview and probably the actual architecture of my brain. I primarily think of it, for me, as a tool I use to cope, but I also think of the human body as a collection of tools. So it’s very integral to me. I can’t separate from it. I’m not sure if it reveals something about me so much as it just is me.

SP: Can you talk about some aspects of ‘being a writer’ that you like/dislike.

I like the writing part of being a writer. I wish I could just write a book then put it into my mailbox, and later someone would take it and replace it with an incredible amount of money/snacks

SP: Yeah I feel you. Most of it, except for the actually writing part, as well as anyone identifying with it, is kind of bogus. But probably constructive. Can you talk a little bit about how you went from not having a book published to now having two published? Was there a lot of submitting to journals? How did you arrive at your first book? I believe they are both with the same publisher. Can you talk a little bit about your relationship with your publisher?

KW: I remember when I was in college the free campus therapist(?) had me write a list of reasons I wasn’t dead yet. I said that I wanted to publish a collection of poetry before I die, which was true, but also was an unachievable goal I had implemented in order to indefinitely prolong my life. I was/am big on tricking myself into doing things. It’s been very effective. Anyway, I eventually wrote a book but was intimidated about submitting it to publishers, and I kept submitting it and then withdrawing it a few days later. I found Bottlecap Press, and they were small, friendly, and located near where I was in the midwest, so I felt okay submitting to them. They’ve been communicative with me, and I like the editorial control and royalties, so when I wrote another book I emailed them and asked if they wanted it and they did. It’s been nice. Shoutout Craig and Brendan.

SP: Most of your endings are pretty amazing. They provide insight/a twist/opposite of closure. What is the process like for ending something? I feel like maybe the endings are written before the piece. Is that accurate?

KW: Some of them I come up with the ending or one of the stanzas first and then build around it, but others like, slowly emerge from the fog in one piece. I am a conflicted and inconsistent person so it’s hard for my poems to take a single stance I guess. Sometimes I’ll say something and the person I’m talking to will be like “you directly contradicted that last week” and I’m like “yes, well”

SP: What kind of future projects do you have going?

KW: I don’t have anything going right now, but I’m interested in doing collaborations with people in the future. I want to work on a book of writing and visual art with someone but I like…don’t know how…besides vaguely wishing that it will happen…

SP: One of my favorite pieces from ‘Killer’ is ‘Night Tennis.’ What are some further rules of night tennis?

KW: The most important rule of night tennis is don’t accidentally take a bike that isn’t abandoned. One dude we were with did not get the memo about ribbons signifying abandonment and when we got back we were like “my man, you just did a very straightforward theft.” He got flustered because he had already committed a different crime and didn’t want to get punished by the Kirksville Missouri police department. He rode off into the night and I literally never saw him again.

No tennis balls are used.

SP: Who are some writers that influenced you?

SP: What are some life events that influenced you?

KW: The most prominent life event that influenced the poems in Killer is probably “having a terrible time in rural Missouri.” This event spans about 3.5 years.

SP: Ok so you’re a midwesterner. I’ve always thought that’s a huge personality trait/experience that goes into someone’s style. Do you feel that being from the midwest has contributed something? I feel like the humor/sadness combo is uniquely midwestern but i’d like to hear your thoughts.

KW: I’ve definitely got the Midwestern Shame Disease. I guess we’re supposed to be friendly but I think that’s because we’re really just embarrassed to be here (on earth). I moved to San Diego a couple months ago and I keep panicking that I’m not easygoing enough. It’s great

SP: Do you do many readings? If so, what are you thoughts on them both as a performer and as an attendant.

KW: I don’t do many readings because I feel like my writing is more suited to a page than a voice. I like going to readings sometimes. Recently I went to a reading where this guy was reading a poem about how all his ex-girlfriends are crazy and my friend and I were drunk and started hissing like we were evil. So that was fun

SP. Is there anything you’d like to say to the people reading this?

KW: Thanks for reading this. It was very cool of you. I just looked out the window and saw what I think was a man pedaling a motorcycle uphill but I don’t know if that’s possible and I’m not gonna google it either.

SP: Thank you for your time.

Bottlecap Press is an independent publisher located in Alton, IL. More information can be found at their website, bottlecap.press.

Kimmy Walters lives in San Diego, CA and is originally from St. Louis, MO. Her two full-length collections of poetry, Uptalk and Killer, are available from Bottlecap Press. She can be found on twitter as @arealliveghost.

Sam Pink is the author of Rontel, Person, Witch Piss and many more. His next book, The Garbage Years, is forthcoming from Catapult

POEM ABOUT HOW LITTLE AFFECTION I HAD FOR HIM

poem about how little affection I had for him

folding it into a paper airplane

sailing it
into his mouth

she took one hand off the steering wheel and found my shoulder in the dark.

the pain will be interesting soon, she said.

your absence is nearly everywhere

my absence is nearly everywhere

GOOD MORNING, I AM NOT GOING TO COMMIT SUICIDE TODAY

good morning,
I am not going to commit suicide today