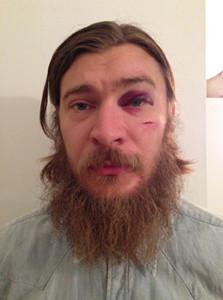 I probably remind my old man of the woman he lost. So maybe that’s why I always feel like I don’t belong. And why he gives me so much space. I don’t know if it’s that that made me distant. Independent. But what I am sure of is that it makes leaving pretty easy.

In fact. I’ve been thinking about it for years. But where do I go? And how do I pay for food? So I’ve had to wait. Until after my 16th birthday. When the fighting with my dad’s new wife gets to be too much. I just pack my bags.

And when I come through the kitchen. Shes standing there. She asks me where I think I’m going. I tell her the fuck out of here. That I can’t take it anymore. That she’s had it out for me since the day she moved in. Scared that I might remind my father of what he used to have.

She makes threats. Like I’ll never make it. That I’ll be back in an hour. That I’m too fucking stupid to last a day on my own. The whole time I’m by the door. Lacing up my boots. Laughing at her. Certain she’s the stupid one.

I walk down the slight slope of their driveway. A backpack full of t-shirts and socks and underwear and books on my back. I have 50$ and 2 packs of cigarettes in the pocket of my army surplus jacket. But no lighter. You can’t have everything I tell myself.

When I get to the main road the sun is setting. I stick out my thumb. It’s the quickest way I know to get out of the shitty little lakeside village we live in.

After about ten minutes of walking backwards. A beat up old sedan skids to a halt on the gravel shoulder and I don’t hesitate. It’s got all the signs of a bad time. Chipped blue paint. Rust showing though. And a greasy longhaired fisherman sitting behind the wheel.

I hop in and sit down. There’s a hole in the floor between my feet half covered by a greasy pizza box. He shrugs his shoulders. Mutters oh yeah and tells me to watch out. As we speed down the highway I watch the asphalt blur like running water.

‘I used to hitchhike all the time when I was your age, man’ he tells me through a cloud of second hand smoke, ‘some of the best years of my life. Where you off to on a school night?’

And I don’t know why I do it. Later I tell myself it must’ve been the hole in the floor. The road going by between my feet. A calming effect washes over me. And instead of keeping my mouth shut. Or lie. Like I always do with my family. Scared of them getting to know me. I answer him.

I lay it all down to the man in the cloud of smoke. He lets me talk. And I tell him how this town and my family and school and my friends and the future feels like two hands around my throat. And how everyday a little more of my life is slipping away. And how I don’t think I’ll make it much longer if things don’t change.

When I’m done he pauses. Butts out the third smoke he’s smoked since I got in the car and lights another. He takes a long drag. Fills the interior with a fresh cloud.

‘You’re doing the right thing man. It’s time you’re out on your own,’ he says. And he’s telling me exactly what I want to hear. And even though I probably shouldn’t. I listen. Mistaking his advice for truth.

When he drops me off at a gas station on the edge of town he gives me five cigarettes. I ask for a pack of matches. He holds out his hand and I give him mine. We shake by interlocking thumbs and wrapping our fingers around the back of each other’s hands.

‘Best of luck, brother,’ he tells me as I shut the door behind me. And before I can take a step back he squeals off onto the highway. Passed the sewage treatment plant. Into the night and out of my life.

He was here just when I needed him.

Even though I’m appreciative of the ride and the advice. I wish he’d dropped me off a little closer to where I’m going.  It takes me almost two hours to walk across the city. To where my friend Greg lives.

He’s almost 20 and moved out of his parent’s house a year ago. He works as the night janitor of the YMCA. The pay and the work are shit. But he has enough to pay his rent and get drunk every night.

In my eyes he’s a real success.

I knock on the door even though it’s early. And there’s no lights on. When there’s no answer I get ready to wait for a while. I sit on his broken concrete porch for hours. I smoke cigarettes.

I think about how if I were home I’d be lying in bed. Watching TV. Wondering when someone was going to bang on my bedroom door. Start yelling.

And how I’m fucking freezing sitting here. And don’t know if Gregg will let me stay when he shows up. Or when I’m going to eat next. But this still feels better than lying in that warm bed. Ten feet from a full fridge.

When Greg rolls up on his bicycle I’m freezing and exhausted. He’s drunk. I’m not sure if that’ll work in my favour. His reputation doesn’t include alcohol induced kindness. And his face is screwed up into a frown.

‘Stan, what the fuck are you doin’ here?’ are the first words he slurs out.

I go over my story again shivering on his steps. He nods along. But I know I have to keep it short. He’s fading out.

I ask him. If I can crash here for a while. I’m certain he’ll say no. So I start thinking of other places I can go. Like under the train bridge a couple of blocks away.

And he surprises me. Says I can sleep on the couch. But I’ll owe him half the rent. I don’t know what else to do. Because spending a night under the train bridge doesn’t feel good already. So I agree. Unaware of how awful things are going to get.

Even though that night I get a glimpse. Greg stays up until dawn. Drinking cheap malt liquor. The kind that makes the strongest drunk alive turn into a piece of shit. Augmentative. And ready to fight. But Greg’s not strong.

I spend the night lying on the couch. Hoping he’ll go to sleep. Or at least start sharing the piss he’s drinking. Listening to him rant and rail. And the more I agree with him. The louder he gets.

The next month is a complete fucking nightmare. Between his bullshit. And not eating that much. I don’t make it to school much. I’m too tired. The long nights taking their toll.

So I sleep the mornings away. Catching up. In the afternoons I try to find ways to make money. But it’s tough. No one wants to give me a real job. I don’t have a resume. Or experience. Or a very good attitude.

They all ask me why I’m looking for work. And I’m too fucking honest. I tell them I’m hungry. That I need to pay for the roof over my head. Which always results in a queer look. My age and story not matching up. So instead I get advice instead of a job.

‘You should go back to your parents son, get an education.’

And it’s hard for me. To keep my mouth shut. To not tell them to go fuck themselves. Spit on the floor by their feet. And I’m not sure what stops me. But I usually just walk away before they’re done talking.

So on the weekends. I get up early. Go around the neighbourhood. Knock on doors. Offer my services as a workhorse. I’m given odd jobs cutting lawns. And weeding gardens.

Sure. It’s fucking demeaning. And I hang my head when I do it. But more often then not I end my day midafternoon with a sandwich in my stomach. And 50$ in my back pocket.

But it isn’t enough to keep afloat. I quickly learn eating and drinking is a pricey luxury. I give up on things like milk. Vegetables. Fruit. And any meat not dumped out of a can.

And living here isn’t easy. I have to start drinking more. Because it’s the only way to stand Greg. His late night benders. All we do is sit in front of the TV. Yelling at one another. And I feel as though I’m as close as I’ve ever been to strangling someone most nights.

So when the end of the month rolls. I’m short. More than half. All I can do is give him 75$. I tell him it’s all got. He looks at the money in his hand. Disgust on his face.

‘Well then you better go apply for welfare I guess?’

But I’m not ready to do that. I have too much pride. I come from the kind of family that looks down on people on welfare. Openly makes fun of them. I’m ashamed of what I’ll have to tell people. Because they’ll ask. And I won’t I be able to keep it a secret.

Luckily. About a week later an aunt of mine gets married to her long time boyfriend. I go. My parents are there. We sit at the same table. Match each other free drink for free drink. By the time they leave I’ve been given 500$ and an invitation to come home any time I want.

That night when I get back I throw the remaining 125$ I owe Greg in his face while he plays a video game. It takes me another two weeks to burn through the other 375$. Lavish meals and name brand whiskey.

I move back in with my folks the next day. A week before I owe Greg another month. One last burn for having to deal with his nightly terrors.

But my folks and I were never meant to get along. We all should’ve known better. But the cheer of the wedding. The booze. The rose coloured glasses. We foolishly fell for our lie.

We fuck up. Unable to believe that if we want it too work we’re going to have to stay drunk. But of course when they catch me taking some of their white rum things turn nasty. And after a few more days of sober relations we’re right back where we started from.

Then one day my stepmother tells me to shape up or ship out. And I just look at her. Smile and laugh. And she asks me for the 1000th time why I think I’m so much better than her.

My answer is to turn around and walk to my room. Her yelling behind me. Certain of what I’m going to do with my life.

In my room I lie in bed. Hands behind my head looking at the ceiling thinking it’s not entirely up to me to fucking shape up. Sure, I’m not that old. But I’ve learned a thing or two. And one of those is that no one is free of being a piece of shit.

Steve Anwyll lives in Montreal. He writes a monthly piece for Hobart called hinterland transmissions and runs the twitter @oneloveasshole.