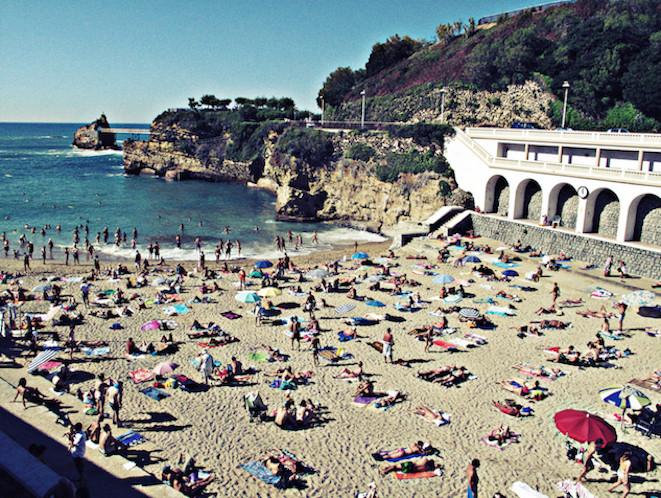 A man in a denim jacket met them outside the building and gave them the key.  It was cheaper than any hotel, and centrally located.  There was only one bed, but Rachelle had insisted on it.
The studio apartment overlooked a courtyard.  The kitchenette had an L-shaped bar around it, separating it from the bed and the rest of the studio.  A single rose stood in a clear vase on the counter.
There was also a green couch.  Ben discovered a lever on the side of the couch.  He lifted the lever then pushed it down.  The couch flattened into a futon, bumping and scooting the coffee table away.
“Perfect,” he said.
“Really?”
“Hey, I’m giving you the bed,” Ben said.
As a couple, this was their first trip together.

After his nap, Ben left to purchase toilet paper.  He passed a café, the late afternoon aperitifs and wine glasses flaring in the light of the low hanging sun.  The green neon pharmacy sign looked promising, so he went inside.  They didn’t sell toilet paper.  They redirected him to the supermarché but he couldn’t find that either and instead walked into a small market with fruits in crates on the outside.  On the shelf they had two kinds of toilet paper, one pink, one white.  The pink one said Ultra Doucette.  He thought of Rachelle.  He bought it for her.

That night, they ate dinner at an Italian Restaurant.  Rachelle had found it on some blog.  Ben had spaghetti alla carbonara and Rachelle had a small bowl of rigatoni with pork meatballs.  They finished the meal with Tiramisu.  The agreement for this trip was to spend money on good food.
When they returned to the studio, they felt wide-awake still.
“Maybe we shouldn’t have napped,” Rachelle said.  Ben took her to the bed.  She lifted her arms and he removed her dress and he unbuttoned his own shirt.  She tried to touch his chest, but he didn’t like it when her fingers lingered.  He got on top and they remained that way.  Then, she tried to spoon him.  He preferred not to be spooned.  He could do the spooning though, he offered.  She let him.
“Stay with me,” she said.
She drew the sheets and he closed his eyes.  But then he got too warm holding her, so he turned away.  The cool heel of her foot grazed his calf.  He scooted further.  She sighed and breathed and rolled around, the bed creaking.  He tried.  He really did.  Then he got up.
“Sorry,” he said.  “I’m not ready.”  He took a Valium and slept on the futon.

The next evening they took the metro to have dinner with Kendall, a friend of Rachelle’s from college.   Kendall was living in the city.  In the loud restaurant they sat across from Kendall and her French boyfriend Jerome.  Jerome had crooked teeth and tried to make jokes in English.  When the charcuterie plate arrived, Jerome pointed at the walnuts.
“They make you smarter,” he announced to the table.
“Um, why?” Kendall asked.
“Because they look like brains.”
Kendall looked at Rachelle and rolled her eyes.
“You should eat some,” Jerome said to Kendall.
“Thanks?” Kendall said.
After dinner, Ben flagged down a cab.  They’d had a lot of wine and Rachelle didn’t feel safe taking the metro late at night.  She had heard stories.
When they got back to the studio, Ben watched Rachelle lay out their sole towel on the bed.  Her period had started but the wine made her feel better so now she was okay with having sex.
Afterward, they listened to the light rain and the gentle wind pushing against the window.

The next morning they dressed into nicer clothes and took the metro to the museum.  Outside the great glass building, Ben handed over his camera to someone and he put his arm around Rachelle and they both gave their best smiles.  On the LCD screen, they reviewed the image.  Rachelle wasn’t thrilled with how she looked.
Inside the museum, they stood in front of the art.  One in particular caught their eye.  It was a painting, the back of a woman sitting in a chair.  She had black wavy hair and was wearing a white blouse.  All you could see was the back of her head and shoulders, and the back of the chair.  Ben didn’t care for it, but it was Rachelle’s favorite.  She saw it as empowering.  For the rest of the time, he stayed one installation behind.

The next day, they headed to the coast.  Rachelle packed her things.  Ben folded the futon like nothing ever happened.  At the train station, their TGV was already boarding.  Ben consulted the tickets and found the right car and, once inside, the seats.  Another couple was sitting in them.
“Excuse me,” Ben said.
“Pardon?” the man asked.
Ben showed the man his ticket.
“Ah,” the woman said.  “You can take ours?”  The woman pointed at the facing seats in front of her.
“Sure,” Rachelle said.  Ben stared at Rachelle.  Other people were trying to board, lining up in the aisle.
“We’re in the way,” Rachelle said.  She brushed past Ben and scooted into one of the seats directly across the French couple.  So, Ben sat down too.
When the train began moving, it was clear to Ben why the French couple had taken their seats.  The seats Ben and Rachelle now sat in faced the opposite direction the train was moving in.  Rachelle’s eyes were already closed, her head leaning against the window, arms crossed.  The land blurred by in reverse.  The couple across from him sat comfortably, gently flipping pages of their respective magazines, a shared bottle of water within reach.

Three hours later, they arrived.  They took a bus into the coastal town.  School children in uniforms boarded the bus.  There were seats in the back, but everyone stood and rolled around.  Ben bumped into a boy as the bus took a heavy turn down hill.  The buildings were old and pink and the ocean glittered.  Spires of churches poked the blue sky.  Ben pulled the cord as they neared their hotel but the bus driver didn’t stop, so both Ben and Rachelle yelled to the bus driver.
The place was called the Hotel Anjou, a stretch away from the water.  It was really a hostel, even though they called it a hotel.  In the lobby, a young man sat with his laptop.  No one was behind the desk.  Ben turned to speak to the young man, but he clamped his laptop shut and left through the front door.  There was a bell and Rachelle pressed it.
A ruddy-faced man appeared, hair thinned and disheveled.  He was wearing a polo that was probably once white, but was now almost yellow.  Rachelle gave him the name.
“One queen,” the man said, with a French accent.
“Excuse me?” Ben said, looking at Rachelle.
“You have a room with one queen,” the man repeated.
“That’s a mistake,” Ben said.
“No, it’s not,” Rachelle said to Ben.  She had booked the room.
“We need two beds,” Ben said.
“One moment,” the man said.

Their room was in the annex, across a small road, right above a barber’s shop.  Ben trailed Rachelle as she pulled her suitcase along, the wheels loud against the cobblestones.  Inside the building, they faced a long, spiraling staircase.
“I can do it,” Ben said, referring to her luggage, but she didn’t respond.  She left her luggage at the foot of the stairs.  He took a couple deep breaths.  He carried her luggage up first.
By the time he got to the room with his bag, she was already in the bathroom with the door closed.  Her suitcase was splayed open on one of the beds, closest to the door.  Ben dropped his bag in between the beds and walked to the window that was shuttered.  He saw where the hinge was and pulled the shutter away from the window and cranked the window open.  Light filled the room, a triangle of sun appearing on the white bed sheets.  Outside the window, a church bell tower greeted him, and just beyond, the turquoise ocean.  Ben heard a door open and turned to Rachelle.  She was in a summer dress, the shoulder straps of her black bikini showing.  He saw the black mole on her back, the size of a small jagged country on a map, and the light brown hairs sprouting from her toes.  He stared hard at the tiny cleft at the tip of her nose.  It looked like a butt.
“Where are you going?” Ben said.
“What does it look like?”
She grabbed her purse and a towel from the bathroom and the front door of the room closed behind her.  He heard the echo of her flip-flops smacking the stairs.
Ben returned to the window and looked out.  A gentle breeze swam through his hair.  It was nice and cool.  He took a deep breath, then sat on his bed.  Then, he lay all the way down.  He felt heavy, tired.  He didn’t sleep great the night before.  The ocean air kicked lightly into the room.

When he woke up, he couldn’t tell if it was the next day or not.  He looked at the bed next to him and saw Rachelle’s suitcase there still.  He stood up and looked outside.  The sun was still high.  He found his board shorts and sandals and changed into them.  He made sure he had his key.  Then, he left the room and walked down to the main beach by the casino.  The streets were busy.  He passed tourist shops selling beach towels and t-shirts and other shops selling chocolates and pastries.  There was even a Vietnamese restaurant.  He felt thirsty and decided to buy an Orangina.  When he reached the beach, it wasn’t as crowded as he thought it would be on such a nice day.  Most of the people were sitting at nearby cafés in their sunglasses.  There was a squat little building selling ice cream right before the pavement turned to sand.
He took off his sandals and zigzagged around the warm sand.  People of all ages were there, some on their backs, others on their stomachs.  Some of the women were topless.  He tried not to stare.
At first, he almost passed by Rachelle.  He was searching for her black bikini.  His eyes stopped on it lying tangled in the sand.  It looked like something dead.
She lay on the towel, her arms raised above her head.  She was topless, taking sun, her eyes behind sunglasses.  He couldn’t tell if they were closed or not.  Two strong looking men sat behind her.  They looked maybe German, blonde, shirtless, bronzed.  One of them was smoking a cigarette.  They looked at her and spoke to each other.  He couldn’t hear what they were saying.
“Rachelle,” he said, standing over her, his shadow covering her breasts.
She raised her hand to her forehead as if to block the sun.
“Hi,” she said, unsmiling.
“Why are you topless?”  Ben looked at the two men sitting on higher ground.
“It’s legal here,” Rachelle said.  “Can you move?  You’re blocking the sun and it’s making me cold.”  She stretched her body away from his shadow, scooting back into the light.