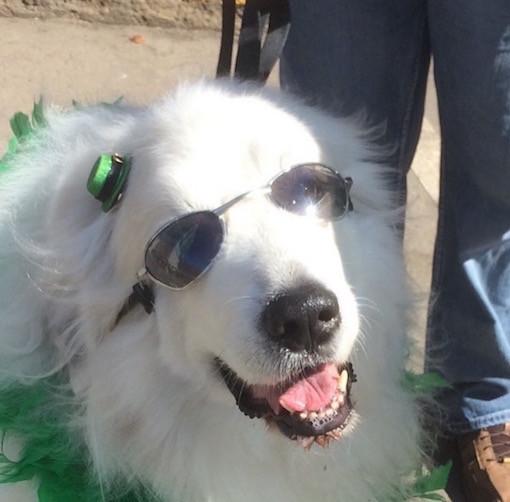 Standing on the dock in the afternoon rain, my dad says he’d rather I have a bad time fishing with my old man than a good time playing computer games.
He doesn’t say things like “Your old man” much, but sometimes he does. Or he’ll call me sport, or champ, mostly when I do something dumb. One time I light a whole book of matches on fire and throw it on the floor and stomp on it. It leaves a black spot and my dad says, “You really just did that, huh.” And he’ll pour seltzer from a one-liter bottle into the bottle cap, and I’ll drink from that. We call seltzer bubble water. Always bubble water around the house, always pretzels.
We’re walking the dog and we stop under a billboard for one of the casinos. Dad pours me bubble water. Cars go by, fast. For the first eight years of our life – the dog and I were born in the same year – the dog had to live in my dad’s woodshop. It made her mean. When I got home from summer camp one year she didn’t recognize me, and she snapped at me, and my dad had her put down. The veterinarian’s name was Bobby. Her son and I were friendly. He had better video games than I did. I wet the bed when I slept over there once. Bobby died from ovarian cancer when her son and I were in our late teens.

At night in the rowboat he gives the stars names. If the next time we’re out rowing I ask where one of the stars went he’ll say Florida, or jail. He slaps me once, when I won’t shut up in the back seat of the pickup truck coming home from the movies. Another time I find a cassette of Leon Live under the seat in the truck, driving home after Fourth of July fireworks. We listen to it and my mom seems to say something disparaging about Leon Russell.
Years later I drive Will and Rose to Filmforum to see A Poem is a Naked Person, a documentary Les Blank made about Leon Russell in the early nineteen seventies. It was not released until 2015, two years after Blank’s death, a year and a half before Russell’s. In the film an old man in Oklahoma says that after he met Leon he grew his hair long and his wife says that it makes him look cute. And a sky diving instructor chews up and swallows a pint glass. I stay up late that night listening to Leon’s first few solo albums. My parents come to visit and I play the movie for them on my projector. They sleep in my bed, and I do cocaine alone on the couch until seven in the morning. The next night we watch Gimme Shelter.

Zachary German has published a novel and a booklet of short fiction. He lives in New York City.