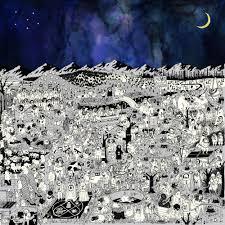 I want to defend the new Father John Misty album, “That’s Entertainment” or “All That Jazz” or “Misty Schmilsty,” without listening to it. This isn’t even hard. In the words of Handsome Dick Manitoba: “This just a hobby for me.”

Imagine if the Bob Dylan lyric “I said, “’You know they refused Jesus, too’ He said, ‘You’re not Him’” was about you but you were Jesus. Or at least the white Jesus. That’s what it’s like to be Father John Misty.

Father John Misty, former godly post-rocker, now a man who renders unto Caesar like it’s his job. He just discovered the world outside himself is terrible for those outside of him and not just those he himself has been inside of. Even the train it takes to cry no longer laughs in the face of men who’d make that train run on time. If I thought Father John Misty would want me to dial back on the esoterics in praise of him, I would. But he and I have an understanding: I think of him too often and he has no idea who I am. In that way, at least I am holding up my end of the Mystery.

The only obscure reference I’ll be making further on in this defense is to the Stan Lee/Roy Thomas 1970s creature Man-Thing. Man-Thing is not to be confused with DC’s Swamp Thing in much the same way that Father John Misty is not to be confused with Mac Demarco. Or maybe vice-versa. Anyway, Man-Thing was/is a lumbering mystical swamp creature whose very touch would cause those who felt fear of said lumbering mystical swamp creature to burst into flames. Its tagline was, “Whatever knows fear burns at the touch of the Man-Thing.” In a nice touch of synergy that I would hope that Father John Misty would appreciate, Man-Thing was best put to use by the comic book writer, Steve Gerber, inventor of Father John Misty’s most applicable 1970’s antecedent, Howard the Duck. Like Father John Misty, Howard The Duck was an endearingly bracing anthropomorphic duck who had a perhaps too often observed sense of the absurd and was “trapped in a world he never made,” and it was also pretty crazy that he wore clothes.

A few immediate things in Father John Misty’s defense. The piano-playing-itself gag was very good. If the Muppet Show was still on, he’d probably be a guest performer and would certainly do a fine duet with Rowlf. I myself can’t really get through any of his songs but he makes people happy and apparently happiness is a goal for many. He unbuttons his shirt on stage, but he never takes it entirely off.

As someone who has, all my life, been exactly half as smart as I thought I was, I relate deeply to Father John Misty. I used to hate him, as far as that goes. I hated his press mainly of course, the sheer humid force of it. I still hate him in a passive daydream sense, I mean, as much as I hate large swathes of people who drift in and out of my psyche and have done me no real, specific harm. But now I think I sort of love him also. I have loved him since his speech at the XPoNential festival, where he called for a profound and appropriate sadness in opposition to total numbness, when he briefly became unaffected jeremiad, like Jesus grew tired of being an industry plant and upturned the tables in the temple. Then Father John Misty immediately went back to being clever, but my love doesn’t die easy.

Father John Misty, bohunk cast from heaven, earnest Namaste heart of the ironic left, wolf in mohair, our piano man child raising middle finger to prince and pauper alike, I sing to you.

I will not reference FJM deep cuts, as his catalog and medium fame renders all his cuts equally deep and anyway there’s something about Father John Misty that makes me dislike the very idea of deep cuts. Such is his power that all B-sides move to the front, not supplanting the single but moving close to it, spooning with jeans on but shirt mysteriously removed at some point in the night. The previous B-side of the wax is now empty, a tabula rasa onto which we can all scratch a drawing of shades on a dog.

FJM has been writing a novel about Jackson ever since the fire went out.

It’s impossible to understand Father John Misty if you’ve never had a roommate.

I haven’t entirely listened to the new Father John Misty album or his old ones either. I’m sure it’s all quite fine but it doesn’t sound remotely like Godflesh.  I did, however, watch his video with the Parks and Rec lady who plays a lot of alt crazy people. I don’t remember how the song went but who amongst has not had a crazy girlfriend. Who amongst us has not had a girlfriend driven mad by our own self-assured martyrdom, our febrile beards, our well-read love, almost Cthulhic in its pussy drenching madness inducement. And who amongst hasn’t thrown the lucky lady from the attic to the back of a van, a van we then lean on, sexily exhausted in our put upon glory.

Father John Misty seems a bit a jerk but as grow older I grow fonder of jerks of small differences.

FJM is Kurt Russel at the end of The Thing and everyone that is not FJM is the rest of the movie. Who is in who, waiting to transform? Will the ensuing frost save us? Isn’t the cold a relief?

I’ve never really listened to FJM because why would I? A d-beat band works because it’s all the same, thousands of bands that play real fast and wear shoelace headbands. If everything is a nail to a hammer, you can fix the shit out of what ails you with any band with “Dis” at the beginning of their name. FJM is like a few other rock bands that don’t just play the part of “second line on poster of outdoor festival” but define the role. Fine music, all, but largely without function. Too generic to be art and too distinct to be a useful tool. FJM has more in common with Lady Gaga than he’d probably care to admit. Maybe his new album is bad but it doesn’t really matter. Misty’s importance lies exclusively outside his music. He’s a charmer who’d like to be caustic. He’s a man, sure, but useful as a shifting symbol, a good Christian making gestures towards vaudeville. A white cis punching bag that occasionally punches back but it’s, in the language of his tribe, “all good.”

Father John Misty has calluses from playing so many chords. But they are not rough. They are like an expensive rye. When his hands touch you, you burn like he’s Man-Thing but it is not fear that causes the immolation…it is excess of sensual awareness. He calls god a sky dad and that’s not a joke. There’s no sky until Father John Misty lifts you, making his untucked button down a period and an exclamation point. I mean, I assume that’s what it like when Father John Misty lays hands upon you. Your hair will smell like bourbon and incense until your dying day.

I know Father John Misty is finally good because people who were wrong about him being good before and don’t like him now don’t all of a sudden start being right. That’s not how this all works. Or maybe they were and maybe they are. It’s been implied to me on social media that I have a tendency to ascribe malignant intent on those with different taste. Of course the last man to imply this has aesthetics that tilt towards Chill Wave so who knows what bed of baby panda bones he sleeps on at night. But publicists keep telling me that dark time call for empathy so let’s go.

Why have some turned on him? Because people want sincerity on their own terms, the sincerity of someone who looks you in the eye while they caress your face, tells you that the only thing they hate more than breaking your heart is themselves. People like being told that their most callow and cruel behavior can safely be written off as “self-loathing” and “sadness at its core” like that shit wasn’t Fuckhead-Creep–To-Those-You-Fuck 101 since pre-Afghan Whigs days. And now that everyone is aggressively sad and says so, we’re free. “Sorry for the STDs and emotional beat down but please know that I really hate myself.” Now that Father John Misty’s excruciating self-awareness has turned outward, his scorn expanding to, I assume, iPads and warfare, he’s apparently a bore. People don’t like being told that their errors are their own, truly, their passions trivial beyond belief, and that that their tax dollars and job choices kill children an ocean away. That’s self-righteousness and wildly unsexy. People will take a man’s hand and force it back to their cheek, they’ll break your hand if you withdraw a sensual lie. I’m no better perhaps but, containing shitty multitudes, I also like anything that makes people feel bad. Most of us are the children and beneficiates of empire. We deserve to feel bad. I like finger wagging Father John Misty because the initial joke wasn’t funny, but bitterness I get. I don’t know that bitterness without failure is properly earned but I’m feeling generous. It’s a bit of a letdown knowing that this is probably a phase and the next press cycle will be about his newfound faith and visions of love. I bet Joshua Tree will somehow factor in. That will be miserable in general and ruinous to this effervescent narrative I specifically cling to. But that’s then and this is now and I’m on currently all aboard the Tillman Train. He seems like, if not a friend, then a friend of a friend who makes me feel bad about myself at the bar. I won’t deny a man I can love and hate in equal measure. I want to be the sort of person who is passionate.

Father John Misty is our end-time party anthropomorphic duck. He’s vehemently defending Stranger Things at the after party. If truth is hanging out in the kitchen, FJM is at least in the living room dominating the conversation. He is our lizard brain king. He can do whateverthing. Father John Misty sways adjacent the sun. It’s enough If you’re wearing sunglasses.

Zachary Lipez is the coauthor (w/Stacy Wakefield and Nick Zinner) of Please Take Me Off The Guest list, Slept In Beds, and No Seats On The Party Car. He is the singer of the band Publicist UK. He freelances at Noisey, Talkhouse, Hazlitt, and other fine online outlets. He tends bar at 124 Old Rabbit Club.