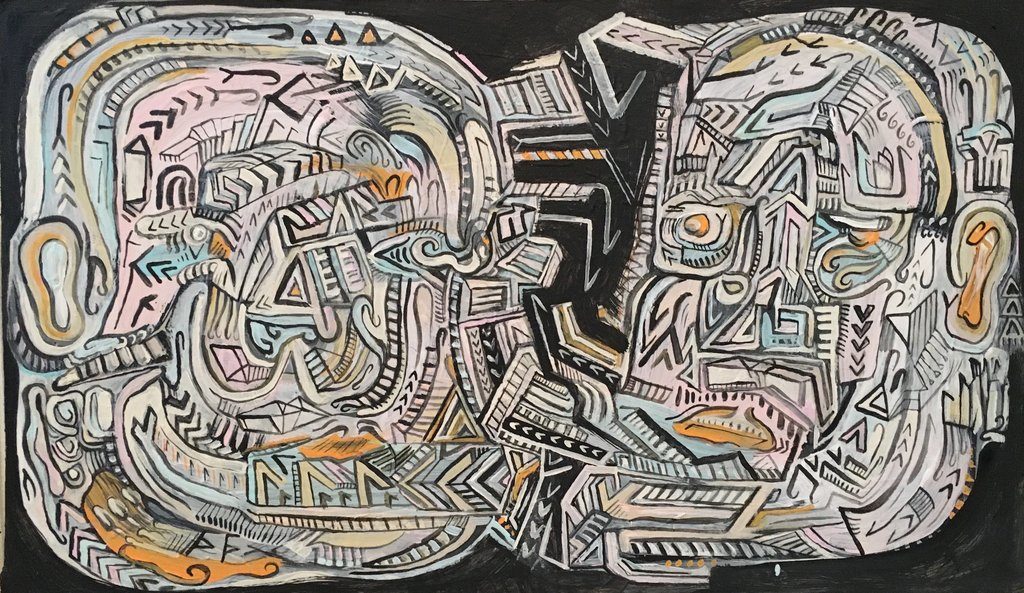 I was walking home through downtown St. Pete, sweating badly.

This older guy crossed paths with me near a concrete ledge overlooking an area of creek.

‘Man, goddamn it,’ he said, stopping by me as though we’d already been talking.

‘This motherfucker….’ he said, gesturing out somewhere.

He had faded tattoos and big, raw pock marks all over his arms.

‘I’m supposed to water these motherfucking plants,’ he said. ‘But this asshole parked his SUV on my hose. I work over here, yenno,’ he pointed somewhere, ‘The guy who owns that building, he pays me to water the plants and then I clean the parking lot for the cops over there, yenno. But I go to get my hose today, the boss says hey you gotta water those plants and I said I’m trying, but this fucking SUV is parked on the hose and I couldn’t get the hose out.’

He stood there shaking his head.

‘My friend in Chicago did them, and.’

He held out his fist.

We hit fists together.

‘Yeah I lived off Cicero Ave. but I’d go downtown for drum lessons when I was a kid. I’m a drummer. Remember Franki Valenti’s? That’s where I took lessons. I’d take the train to Michigan Avenue and then walk to Wabash. I still play drums sometimes, over here,’ he said, pointing somewhere.

‘So you know your paradiddles and shit then?’

‘Let’s see it,’ he said, slapping the concrete ledge.

‘Right-left-right-right, left-right-left-left, ‘ I said, tapping them out on the concrete with my hands.

I could kind of do them.

We stood there doing paradiddles on the ledge.

Neither of us could really do them.

‘My teacher used to always tell me to practice my flams too,’ he said. ‘Always flams. I don’t know why they have you do that shit, who uses those?’

He did some flams and choppy sixteenth notes, slapping them out on the concrete ledge.

‘Yeah sure.’ He slapped my elbow a little. ‘Damn, you got some big ass arms too, good for drumming.’ He held up his arms. ‘The military fucked up my arms. They shake too much now.’

I looked at the bloody holes on his arms.

‘I like that tattoo,’ I said, pointing to an eagle he had on his forearm.

It was an eagle with its wings spread, ‘USA’ beneath.

‘Yeah I got this one in the military and this one,’ he held out his other pocked arm, ‘after mom and dad died.’

It was a crest.

He rolled up his t shirt sleeve to show me the initials of his son in old english font.

On his other bicep he had a small cartoon drawing of a boxer doing the ‘dukes up’ pose.

‘Yeah? I still box,’ he said, pointing somewhere. ‘I go over there. I love hitting motherfuckers in the face. I love it.’

‘I like getting hit too,’ he said, shrugging. ‘I don’t know, I just like it. But yeah those are nice tattoos.’

‘Where should I go around here to get tattooed? I’ve been looking for a place.’

‘Oh, come on, I’ll introduce to the guys over here,’ he said, walking. ‘Yeah I was supposed to water these fucking plants, yenno. I do it for this guy over there, he lets me water them and have a beer, he don’t care.’

‘I work for him and then the cops pay me to clean the parking lot. It keeps me out of trouble, yenno. But I can’t get my fucking hose out from beneath the tire. This motherfucker parked his fucking SUV right on the hose. I’m pulling and pulling, nothing.’

We walked down the block.

‘It’s that place right there, see the sign,’ he said.

There was a wooden, cowboy-style sign that said ‘tattoo’ hanging outside.

He led me into the shop.

The tattoo guys waved and said hi to us–one of them working on someone and the other going through a binder with someone.

‘This is the place to go,’ said the guy who’d brought me, leaning on the counter. ‘These guys are the best.’

I asked them for a business card.

The guy at the counter gave me one.

‘Alright thanks a lot, I’ll come in sometime,’ I said, waving to them.

Then I said thanks to the guy who’d brought me there.

‘Have a good day, brother,’ he said, holding out his hand.

I went back outside into the heat and started walking.

Forgot which way was home.

So I just walked.

Then it got messed up and I started again.

Sam Pink is the author of The Garbage Times and Other Stories (forthcoming this fall from Soft Skull Press), and other books. His paintings are for sale at http://instagram.com/sam_pink_art