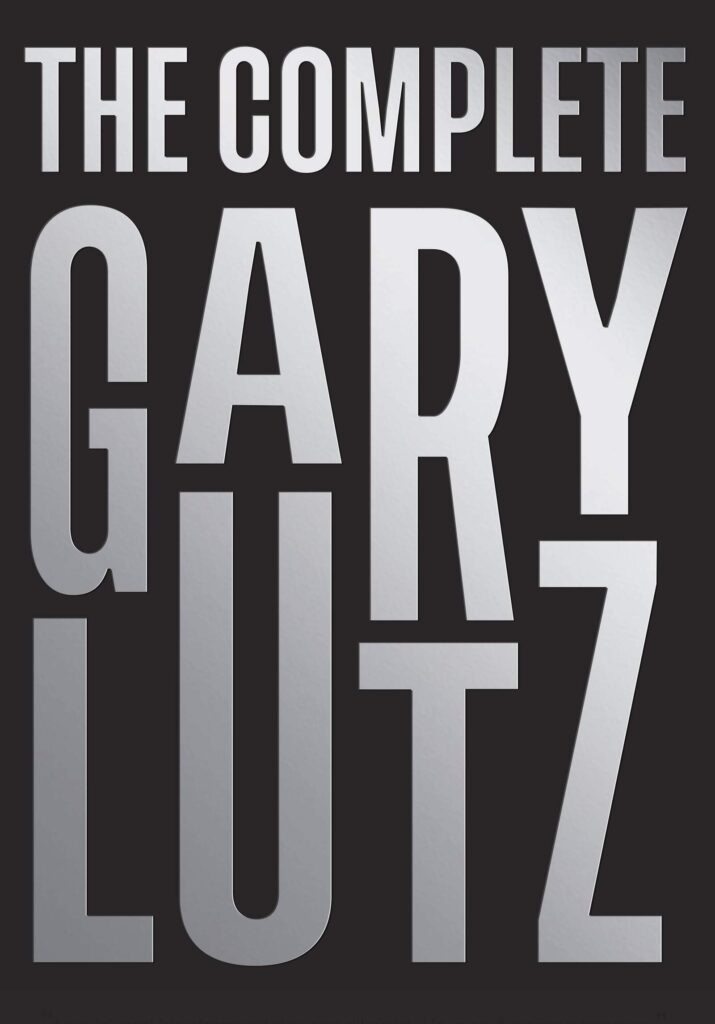 The following story is from THE COMPLETE GARY LUTZ, available now from Tyrant Books.

Because I had colitis, I divided much of my between-class time among seventeen carefully chosen faculty restrooms, never following the same itinerary two days in a row, using a pocket notebook to keep track. I had to wear three thicknesses of underwear. By the end of a class day, my innermost briefs would be elaborately rimed, embrowned, impastoed.
Did I ever worry about the smell when I was passing out handouts in class? Because all I did was pass out handouts and read them out loud, then collect them and dismiss the class. None of it would be on the test. There were no tests—just papers. Not essays, themes, reviews, reports, compositions, critiques, research projects—but papers, sheets of paper, stapled together. I’d lightly pencil a grade in the upper-right-hand corner, and that would be it—no comments or appraisals subjoined in authoritative swipes of a felt-tip pen. I made sure no telltale signs—spilled coffee, dog-ears, creases, crumples, crimps, fingerprint grime—would lead students to believe that their papers had ever been read. But I read them hard, expecting sentences to have been spitefully spatchcocked into the running gelatinization of barbarisms and typos to check up on me, to see if I was actually reading. For instance: “Dear ‘Professor’: You fucking stink. Try wiping yourself once and [sic] awhile [sic]. Or didn’t they teach that were [sic] you went to school? Bag it.” But I never found any such intertrudings.
I was midway through my shadowed, septic thirties. I had been hired as a generalist. What I taught was vague and interdisciplinary and unchallengeable. Whatever I said, it was bound to be correct up to a point. My credentials were fraudulent. I’d awelessly faked my way through a Midwestern graduate school with a dissertation two hundred and eighty-seven clawing, suffixy pages long, all of it embezzled from leaky monographs. Since then, I’d taught myself to mooch off nobody but myself.
After each class, I lumped my way to whichever men’s room my notebook said was next. My life was an ambitious program of self-centrifugalization. I was casting myself out.

Once, there was no way for me to get out of having lunch with a colleague. He had the beard, the paunch, the patter. We sat in the faculty dining room, where I had never eaten before and never afterward ate again. He recalled the previous day’s special: “chicken cordon sanitaire, potatoes non grata, vegetable mêlée.” He said that his profession involved “belaboring the oblivious.” He talked about a diffident colleague of ours who, at department meetings, when given the floor, “bent down to wax it.” He said that when the annual departmental picture was taken, the camera went “c-l-i-q-u-e.” I blinked and swallowed, hoisted smiles, poked at and beveled the block of beef on my plate. When he excused himself to rush off for a one-o’clock class, I sought out the dining-room men’s room, one that wasn’t on any of my regular campus tours. Unlike the nookish, single-person-occupancy arrangements I frequented (their hollow-board doors securing me from corridoral traffic only by the flimsy expedient of a hook and an eyebolt), this was a vast, modern affair with a line of urinals and three stalls. One of the latter was unoccupied, so, taking a seat, I busied myself with some noodling and valving, the virtually noiseless preliminaries, until, emboldened by the whoosh of a neighbor’s flush and satisfied that it would muffle the report of my own bowels, I splattered myself out.

Once, I attended a meeting of the university senate. Why? Because I had an urge to sit in a room with people, adults, salaried specialists. The day before, a sunless Sunday, I’d driven to a mall, slops 1 7 where, from the remainder bin of a chain bookstore, I’d plucked a slim paperback by a doctor, a physician, that said the drizzled stools of a patient with colitis should be regarded as tears. So the next morning, I sat among a hundred or so of my colleagues and listened to a soon-to-retire administrator, a dean of some kind, say two things that I have not since been able to displace. One was that during his long career in the classroom he had learned many, many things from his students. I tried to think of one thing, anything, that I had ever learned from mine. Aside from the example of their grooming habits, sleeve-roll-up techniques, the novelties of their wristwear, etc., I couldn’t come up with anything. The other thing the administrator said was that we all needed to love our students, that in many cases these kids weren’t getting enough, or any, love at home. In the men’s room afterward, I thought about my students, the whole faceless, rostered population of them. I did not love them, did not feel a trace of affection for them, but did I hate them? I decided that it wasn’t exactly hate.

Once, for what must have been well over a month, a dog-eyed girl, a student, a young woman really, at least twenty-three, dimly recognizable from the front-row center of one of my classes, began stopping by for a few minutes during my office hours. She always had at least three questions Magic Markered on pastel-hued index cards, and she asked them in a dampened, worn-away voice. She was an Informational Sciences major. My course was an elective.
One day, after I had answered her questions by hanging, as usual, some suspect, oversyntaxed curtains of explanation in the air between us, she capped her pen and said, “You need a buddy.” She wasn’t smiling, she wasn’t being sarcastic, she wasn’t unsteadying me with a stare. Her eyes were a muddy brown. She had an oily cumulus of biscuit-colored hair. She was wearing a windbreaker, a box-pleated skirt, brown socks. There was an untended, blotchy loveliness about her that had my cock smarting.
I balanced the image of her along the rim of my mind in the men’s room afterward during an especially boiling, bustling efflux, and it occurred to me: Did people think I was beating off in there? Were people keeping track of the time? Had some busybody logged me in? I had the stink working in my favor, but how long after my exit would it be until somebody actually came in and registered the stink and then put two and two together?
When the girl showed up, uninvited but not unexpected, late one afternoon at the house I rented on a pinched street, I offered her dinner—a microwavable box of chicken. I put her at ease by standing in the kitchen and following the red digital countdown on the face of the microwave. She lotus-positioned herself on the living-room floor, started jerking through the classified section of the paper.
“I’m moving out,” she said. Then: “My stepmom, my mother, my boyfriend, school, your class.”
“Everything?” I said.
“All of it. Completely. Practically.”
I arranged some napkins and forks on the coffee table.
“By the way, that smell,” she said. “Now I know.”
I watched her eat. I listened to her talk. Then I watched her lead the way to the bedroom.
Undressing myself, lowering myself into bed with someone new, I always reminded myself that whichever women had ever climbed on top of me before had actually just been laddering themselves up onto somebody else. About halfway through, maybe even sooner, they’d be absolutely sure of it. They’d know who. What was happening with this girl was this: I was handing her back to her boyfriend on a platter.
After she left, I grabbled around in my desk for my grade book, then slapped on bare feet toward the bathroom. Once seated, I turned to mwf 9:15-10:15, Stevenson Hall 142A, and found her: Ramsey, Val. She’d been doing “A” work. In my course, “A” work meant turning in so many sheets of paper over so many weeks. Thirty sheets, fifteen weeks, I think.

There is actually a fourth “once,” something I did that didn’t involve taking a crampy, squdging shit afterward.
Once, on a table in the faculty lounge in the building where my office was, I found a rain-wrinkled newspaper open to the comics page. There was nobody else around. I took a pencil out of my inside pocket. In the white squares between the black ziggurats of the crossword puzzle, I penciled, in heavy, ham-handed caps untraceable to me: COULD EVERYBODY PLEASE BE A LITTLE LESS SPECIFIC? STARTING RIGHT NOW?