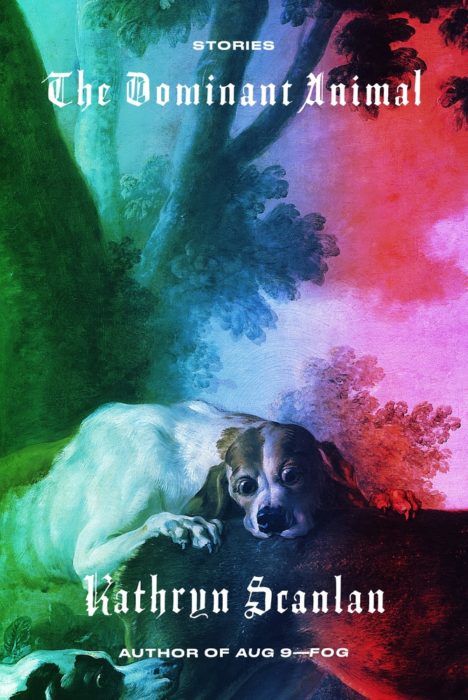 The following story is from The Dominant Animal, Kathryn Scanlan’s new collection of short fiction, available for pre-order now from FSG Originals.

He lights his lawn on fire once a year. He does his weeding on hands and knees, with a knife. The neighborhood is dense and suburban, the freeway and airport just adjacent, but in cool months has a northwoods smell, a frontier kind of aroma, because he heats his house with a woodstove. He scavenges the wood and prepares it with a chainsaw early mornings. The chainsaw enters our dreams, then breaks them into wakefulness.
On certain nights he lights his homemade fireworks. They sizzle, flare. Some, inevitably, are duds.
He rides an old bicycle with a milk crate tied to the back, which he fills with things he finds on the ground. His house he built by hand, from scrap, piece by piece by piece by piece. Still, he can never decide whether the ground-objects are things found, or things lost. Does he live in a found house, or a lost one?
When the scales tip toward lost, he spends all night emptying his drawers, his garage, lugging a bulging sack through the streets.
Every so often he sleeps under the overpass, to see what it’s like.
Animals come for the food he scatters on his grass. They skulk at night, their backs arched in contempt. Their lamp-green eyes wink from his trees. He learns their language. His deep-freeze fills with shrink-wrapped meat in a spectrum of pink.
The bones he cleans into gleaming white abstractions. He puts them in mailboxes and planters, on downspouts and stoops.
The police come to his home and take him away. The crime is understood to be either: (A) Possession of bomb-building supplies; (B) Possession of marijuana and/or hallucinogenic drugs; (C) Growing marijuana plants in a windowless basement room; (D) Possession of child pornography; or (E) Child molestation.
A few days later, he returns in a taxi. He stands for hours in his yard, arms folded like he’s cold.
The shriek of his saw reaches out to every house in the neighborhood. It comes in whether windows are open or shut. It interrupts the interior sounds of television and radio, washing machine and dishwasher—interrupts even the thoughts of the occupants. It disturbs the electricity of their brains in such a way, to such a degree, that they are unable to determine whether or not the sound is coming from outside their heads.

Read more about The Dominant Animal, forthcoming 4.7.20. from FSG.