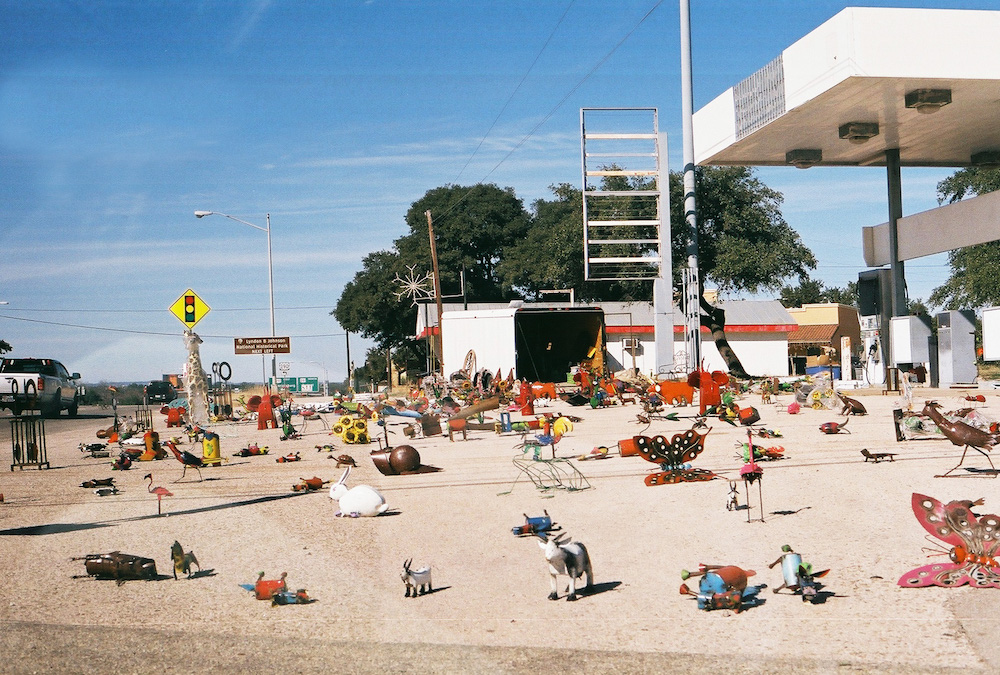 My heart broke down in the mud straight busted. It was just how I expected it to be. It stung a little like nettles to your heel and then it swallowed me whole and then it ached a little bit and then I was setting myself on fire. I wound my fists up around my head like a tornado. I said things to the geese landing on the face of the trash topped pond beside the hotel. Said things like “Oh dang, whatever, fuck.” Said things like “It’s probably my fault.”

Heartbroken in Texas with a red-faced devil sitting on my lap clawing at my chest like a banjo, singing songs about the coming rain. There’s a car stuck on the tracks and the train is screeching trying to stop but it just slams into the car and everybody in the car dies and everybody on the train lives.

I saw a Cowboy father, huge as could be outside the Cracker Barrel. He said his name was Kody “with a K.” He looked like Foghorn Leghorn and I put a peppermint in my mouth and I wished it was you swirling red and white in there. I looked at the Cowboy Father and I said “with a K, that’s really wild.”

I hoisted my fat ass up into an extended cab Ford and a man told me about another man here in Texas who used to pay 16-year-old boys five hundred dollars each to put on speedos, oil up, and wrestle each other in a kiddie pool. He said that the man’s son was a real weirdo-freak too and that the son drove a pink Cadillac covered in pink shag with a longhorn rack attached to the hood. He said that the father killed himself when all those boys parents found out what had transpired, and he said that no one cared that he was dead.

I ate a bag of Cool Ranch Doritos but it was nothing like you. They didn’t cause me so much pain and they didn’t make me wish I was a slab of concrete, getting run over by cars all day just to feel some new kind of heavy touching. I drank an energy drink and I felt like dying. I called Moondogs to order a pizza and the boy on the phone said “We don’t have any key lime pie left” and that was the closest thing I’ve found to you because it was a broken promise and I wanted him to say they didn’t have any key lime pie left over and over.

I saw an empty Sprite bottle on the ground and I felt nothing. I broke all my teeth on cherry red lollipops but I still couldn’t find a trace of you left anywhere. I stabbed at my bleeding gums with the butt of my toothbrush but all I could find was sugar packed in there. You are not the alarm clock and you are not the styrofoam cup, you are not this bed, or pillow, or the rug I bought today. I turned on the tv and I searched for you on every channel. I turned on the shower and I asked every drop of scalding water if they’d seen you. I looked for your reflection in the puddles on the floor.

The lady at the front desk offered me popcorn and I asked if it smelled like you and she said “I don’t know, but it’s salty” and I said “can I cry into the bag when I’m through?” She said maybe the popcorn would help. I took the popcorn from her and I dumped the popcorn in the trash. I kissed the empty bag, crumpled it, and threw it at her head.