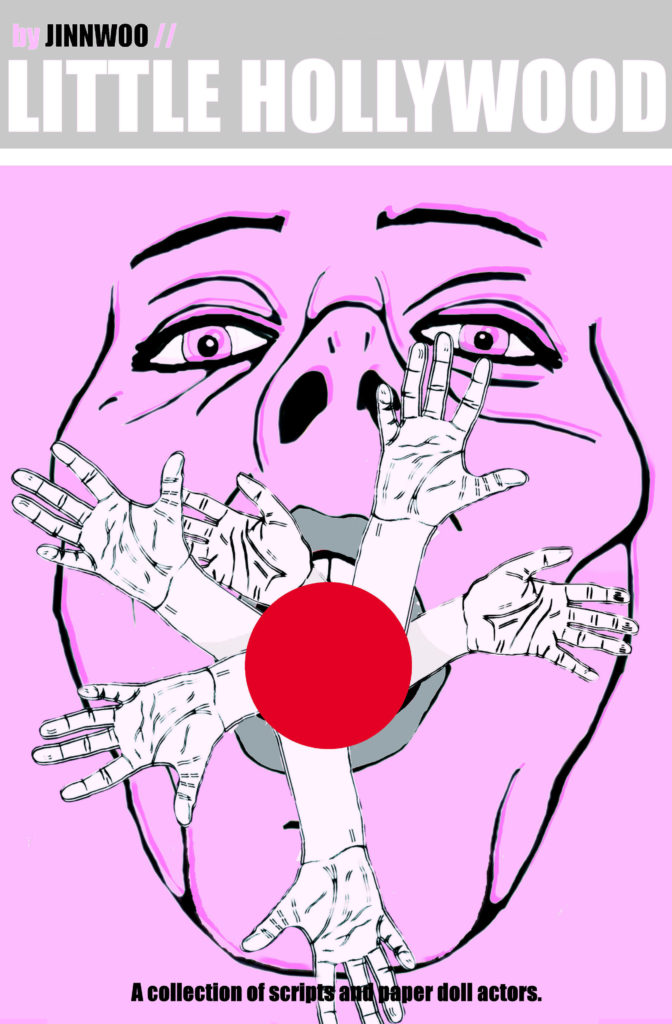 The following excerpts are from Little Hollywood, Jinwoo’s new book, available for pre-order now from 11:11 Press.

WILLIAM enters the charity shop. He approaches the counter where TOD is arranging novelty keyrings in a display. WILLIAM places a plastic bag on the counter. He recently cleared out his teenage bedroom, but only felt emotionally ready to part with his copy of The Communist Manifesto and his ‘Honey to the B’ by Billie Piper CD.

Hello. I would like to donate these, please. I don’t know if anyone will want them.

TOD takes the bag and examines the contents.

Very eclectic. Something for everyone here!

TOD smiles. WILLIAM wants to laugh, or at least smile back, but-

WILLIAM crumples away from the counter and pretends to browse a nearby shelf of knick-knacks. He subtly practises the smile he should have done. To make friends with someone like TOD. TOD was vaguely funny, and comforting. TOD would make a good friend for WILLIAM. WILLIAM considers striking up another conversation, but can’t think of what might make a good topic. He suddenly can’t think of anything happening in the news, or anything that happened ever.

He picks up two porcelain cats from the shelf of knickknacks. They are both blue and white, but they are not a set. He places them on the counter.

That comes to £2. Shall I wrap them for you?

WILLIAM goes home and puts the porcelain cats on the table by his single bed. Every time he looks at them, he remembers his failure with TOD. A monument. After a month, he turns them to face the wall. After two months, he places them in the top draw. They are not a set, and never will be.

It’s the year 2050AD, and sex is contactless. MIRIAM is in bed. Enter JAKE – he sits in the bed beside MIRIAM. MIRIAM and JAKE beep once, each. Their transaction is complete. They smoke Vapes. MIRIAM wonders what JAKE tastes like. She imagines he tastes the way her avocado hand soap smells. JAKE thinks about the never changing weather.

MIRIAM will write to JAKE in an open letter on her blog. JAKE won’t read it.