excerpt of The Garbage Times/White Ibis 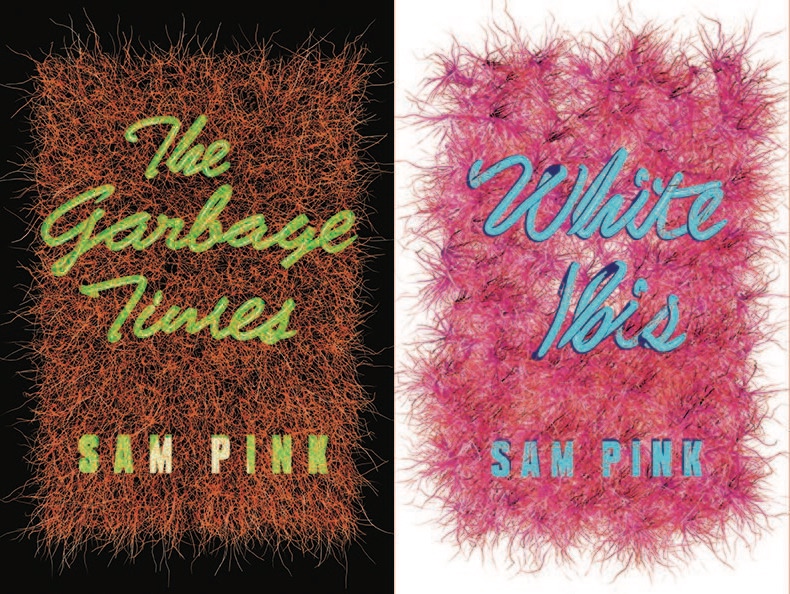 I had the next day off.

I didn’t want to be in my apartment so I went for a walk and ended up in my old neighborhood.

Saw this guy sleeping sitting up on a bus stop bench.

It was my guy Keith.

I used to drink and smoke weed with him when I didn’t have a job.

He had on big yellow plastic headphones that only played the radio.

He always wore a leather trench coat no matter what temperature it was, even like over a hundred.

Slicked-back gray hair and a boiled-looking face and that ‘Is he going to bite me’ presence.

He woke up and took off his headphones.

His eyes looked completely clear and he had a huge ring of orange dye around his mouth.

He smiled his tiny busted teeth.

He grabbed a sports drink container he had next to him and poured some more of a brown-bagged tallboy of orange malt liquor into it.

He never remembered me.

‘No, but hey, nice to meet ya,’ he said, holding out his hand. ‘Thanks for stopping and talking to me. Sometimes I feel so alone out here.’

‘Yeah because it’s like, there’s nothing. Nobody basically, ya know?’

He held his drink by his mouth and waited for me to respond, and when I said yeah, he nodded and took a sip.

Sweat dripped down the middle of his face.

He went to take another sip, then stopped the plastic bottle right before his orange lips and smiled and laughed.

He kept looking around, up and down the street.

‘No, but hey, wanna smoke this weed I got? Get your yayas out, ya know? But no. I was just about to head over to this garden over uh, just past Kedzie. Know where I’m talkin about?’

‘Here, come with. I’ll show you. It’s just across the street and down like, half a block. Here, it’s really—ya know it’s really trang-kwell.’

He smiled and laughed with his eyes wide.

‘Very trang-kwell there,’ he said. ‘Ya know, sometimes I go there and drink my liquor or smoke some pot, ya know. No because, it’s nice. Very trang-kwell.’ He laughed and opened his eyes real wide. ‘Get your yayas out, ya know?

On the walk there, he told me about his old lady.

He walked as though cross-country skiing, taking pulls off his liquor every few strides.

Said she was in the hospital dying of pancreatic cancer.

Said he took the train outside the city to visit her whenever he could.

‘Yeah she’s pretty much dying now though. There’s nothing that can stop it, no. They’re cutting her apart. There’s almost nothing left. I mean, ya keep taking parts and soon there’s no parts left, ya know? Come on. There’s like, nothing left of her anyways, ya know?’

Keith gestured forward with his plastic container of liquor.

The garden was behind an apartment building.

There were benches, planters, some trees, bushes, things starting to grow, birds, vines and things.

Keith sat on a bench.

I sat on the woodchips.

He took out a half-cigarette from his trench coat pocket.

‘No but hey, thanks for the conversation,’ he said, lighting the cigarette. ‘I get lonely. There’s nothing to do. Sometimes I got work. But no, hey, listen, all day—there’s nothing all day. There’s basically nothing, ya know?

He kept offering me his drink.

‘No because, ya know,’ he said, ‘it’s just weird drinking alone. But thanks for the company, I get sad and lonely all the time because, I mean, there’s basically nothing, ya know?’

He took out rolling papers and a piece of foil with some weed in it.

I folded a paper and started breaking weed up into it.

Keith told me he had a lot of jobs but wouldn’t say what they were.

Every time I tried to talk to him about one, he’d say, ‘No no, like, it’s not something ya have to worry about, ya know. No because, just, don’t worry.’

At one point it seemed like he was suggesting he painted traffic cones on Lake Shore Drive.

‘You paint traffic cones on Lake Shore Drive?’ I said.

‘Yeah, seventy-five dollars an hour,’ he said. ‘Oh man, but ya gotta be honest. Except, no, if they catch ya stealing, ohhhhhhh man. No because, no, they’ll most definitely fuck ya up. Man, fucking cut your hands off. Paralyze ya by putting a thing in your spine, ya know? Make ya literally fucking retarded. No because, it’s bad news, I’m tellin ya.’

He laughed really hard and loud until he wheezed like heeng heeng.

When he calmed down, he said, ‘No but they’ll fuck ya up, yeah.’

I asked who ‘they’ were but he wouldn’t answer.

‘Wanna hear something weird?’ he said, leaning forward and smiling. ‘Do you think I’m weird? No, like, in your personal opinion, do you think I’m a weird guy?’

I finished rolling the smoke.

Keith picked up a rock and held it between his thumb and forefinger. ‘Hey no, but don’t take nothing for granite.’

‘No, look, this is granite,’ he said, looking at the rock.

Neither of us said anything for a little bit.

Keith stood up. ‘No but, let me show ya over here. There was some lightning that hit, right over here.’

I followed him to a corner of the garden.

He pulled back part of a bush.

He pointed to an area where he said lightning had hit.

‘Yeah, man, ya know. I came here just to get my yayas out and I’m sittin here and this lightning hits. Wow, huh? Left a big four-foot crater over here. See?’ He pulled back a few parts of a bush and pointed behind it and said, ‘See, it’s right here.’

Then he turned and yelled, ‘Boo!’—his hands up, mouth open, busted teeth bared, laughing like herg herg, holding his stomach.

He picked a few leaves off a bush.

He gave me a leaf.

We chewed the leaves.

I sat down on the woodchips again.

I lit the weed with Keith’s matches and took a big pull and passed it.

We sat there smoking.

I picked up stones and threw them into the bushes . . . to be among the yayas of old.

He was staring straight forward and making sounds like newwwmmmm or gerrrrnk, then laughing until his eyes watered and he lost his breath.

‘Hey but no, we gotta leave I think,’ he said. ‘Should probably go in case they show up.’

He poured the last of his tallboy into the plastic container and threw the can behind a bush.

I knocked off the smoke’s cherry on a large stone.

We walked down a few alleys to a different spot.

Keith was laughing and hiccuping the whole way—saying something like nernk or laaaang every so often, then laughing uncontrollably.

At one point he completely stopped walking and laughed with his head back, both arms out, and yelled, ‘NERRRRRRRRRNK!’

‘Keith, what the fuck?’ I said, laughing.

We went into an unpaved lot with a bunch of scrap metal and garbage, by the back staircase of a house.

I sat on the stairs and lit the smoke again while Keith walked around mumbling things.

There was a huge pile of bricks against the fence.

He picked up a brick and tossed it over the fence, yelling, ‘LAAAANG!’

Then he got serious and said, ‘Oh yeah, and there’s this,’ and grabbed a broken scooter from under the stairs, held it up, then threw it over the fence, yelling, ‘NEWWWWLANG.’

I kept checking over my shoulder because I didn’t know where we were and my back was to a weird basement entrance.

‘Paranoia will destroy ya,’ Keith said, smiling, his eyebrows up really high.

He pointed at me, hunched over in his trench coat.

He walked up and put his fingers in my face and wiggled them and went ‘Doo doo doo doo’ and laughed.

We sat on the stairs and finished the smoke.

Keith looked at me and yelled, ‘Nerb!’ then laughed.

He got serious again.

He pointed beyond the fence.

‘Hey but no, don’t go over there, man. It’s all rock heads. They smoke that bullshit all day. All they do is ask for money. Ask ask. Ya know? What is this, the Gimme Gimme Club?’

‘No but, we should prolly go, I think,’ he said. ‘If they catch you they will literally make ya fucking retarded.’

We walked back down the alley towards a main street.

He tried to tell me about his woman again but every time he just laughed uncontrollably.

He grabbed my arm and said, ‘BRO-KEN GOOOOOOAAAAAAAAT,’ really loud.

I laughed, moving away from his sharp, broken fingernails.

‘Keith, your nails are sharp as fuck.’

When we got to a main road, he pointed at a 7-Eleven across the street.

‘Newww-laaammmm,’ he said, then broke off from me and wandered into the street.

He yelled, ‘Lang’ and laughed, standing in the middle of traffic.

I walked a couple blocks towards the park to take a nap.