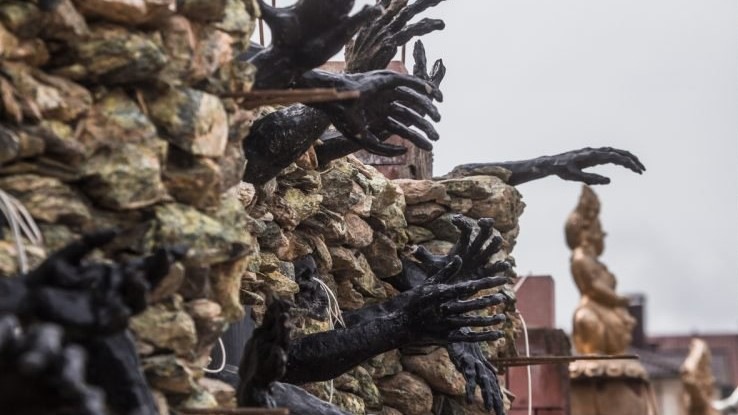 In the windowless laundry room that doubles as my bedroom, Cellar fills me in. “Stevenson’s brother, last night, a junkie, hanged.”
I holster the Windex Bottle I stole from the supply closet at work, and say, “So that explains it.” Then I sniff my cleanest dirty t-shirt again and deem it worthy. We go.
Back out on the stoop with Stevenson, I raise my beer. If nobody else wants to say anything, I figure why not? Didn’t even know his brother, didn’t even know he existed. But you should’ve heard me. Afterward, you could hear our work week hissing out. “I hated that prick anyway,” Stevenson says as our laughter bugles out into the summer night.
Later, all this bonhomie—it makes us hungry. “How about the chicken spot?” I say.
“A little late, no?” says Cellar.
“It’s twenty-four hours,” I try and argue. Although I know Cellar isn’t really worried about the hours. Cellar avoids that part town, where the hands all stick out of the holes in the boarded-up windows, begging for change.
So I give Stevenson’s grieving shoulder a squeeze and say, “C’mon, Bub. I’ll buy you a combo.” We leave Cellar on the curb.
Stevenson huddles close while we walk as the hands shoot around after us. Hello, hello. I try and wave at them to show him that they’re harmless. And when they start waving back, he seems to believe me. “You should run for mayor,” he tells me.
At the chicken spot—after I slide the Windex bottle I promised the proprietor through the slot in the greasy bullet-proof glass—Stevenson doubles down. “You really should run for mayor,” he says.
To which, the chicken spot’s proprietor—an ex-con with a gold tooth and parrot that crapped all over his shoulder—agrees. “I’d vote for you,” he says.
Back on the stoop, Stevenson is greasy-chinned and grateful. Now it’s his turn to squeeze my shoulder. “I have to clear out my brother’s house tomorrow,” he says. “Why don’t you come and take some of my brother’s clothes? It’s the least I can do to say thanks.”
I sip my beer a long one. “Wasn’t your brother a junkie?” I want to say. “Flannel shirts dotted with arm sleeve blood? Jeans full of sleepy cigarette burns? How bad off do you think I am?” But the moment is a tender one, I realize, so I don’t.
So, next day, I go to meet him. I follow the directions he drunkenly penciled down past the boarded-up windows, past the hands and their holes, expecting Stevenson to call out from any empty one.
But I keep walking. And as I walk, the crumbly brownstones begin coming together. Their paint relearns to stick as their doors sprout big, shiny knockers. And suddenly, I’m in a part of town I’ve never been: the nice part.
One such door, I raise a knocker. It’s number matches but I’m dubious. I hold its weight and imagine interrupting a family’s breakfast. Then the door opens, and it’s Stevenson with red-rimmed eyes. Drifting back into the grand house, he sniffles. “I’ve got it all laid out on the chaise lounge.”
And sure enough, before me—pleated trousers and silk button-ups, Italian watches and cuff-links, shoes waxed so hard your eyes hurt and sweaters stitched so fine I had to read the labels. “I thought your brother was a junkie,” I say, turning one in my hand.
“That was his favorite,” Stevenson says.
I try it on. I say, “How do I look?”
Through tears, Stevenson smiles. “Like an asshole,” he says with a laugh. “Don’t feel obligated to take anything. I shouldn’t have made you do this. I’m selfish. I just didn’t want to throw his stuff away.”
“You didn’t make me,” I say, and pull on the pleated trousers to show him. “Don’t be.” I pull on an Italian watch. “It’s my honor.” And I pull on it all until I am plump with wealth and style. I try and remember the nearest dry-cleaner.
Walking back, the chicken spot’s proprietor shoots me double thumbs through his now-clean window. And I feel that lull before the actors break into song as the brownstones crumble around me.
I’ll be out of that laundry room in no time, I think, the windows boarding up, as out reach the hands. “Got any change?” they ask me. “Anything helps,” they say. They form little bowls in which to deposit.
As I pass them, I pat the pockets of my pleaded-pants, half-believing I might find something. Finding them empty, however, I decide to do them one better. I decide that now is the time. So, taking a hand in mine, I shake it. “Vote for me,” I say, and shake another. I stick my head into the empty ones and look for a baby to kiss.