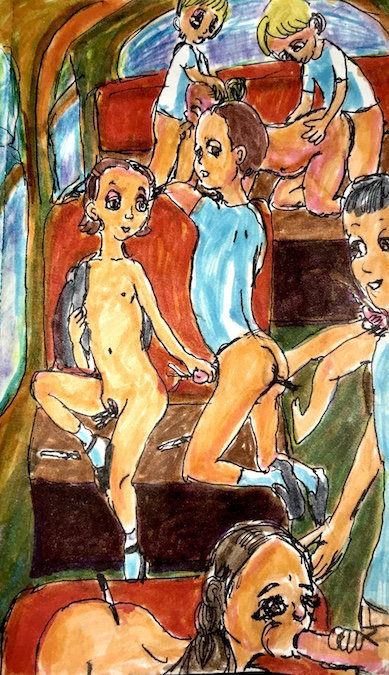 They made you addicted to salt by putting salt in everything. Salt increases your blood pressure and accelerates your heart rate and dehydrates your body. They tell you salt pills increase your attention span so you can work long hours and stimulate the economy. Salt pills make you sweat and look at screens and take more salt pills. You forget to eat and sleep and drink water. Elementary school teachers punish every kid who can recognize violence. Every kid is dehydrated from salt pills that make their eyes look glassy and faraway. Every kid can draw an AK-47.

Only boys play war. Every boy picks a gender: boy or girl. Every boy wants to pick girl but no boy has the courage. The silence between the question and the answer is the war. The rest of the game is spent alone.

A man in South Carolina dies because he shoves a butt plug up his asshole to forcibly prevent defecation after God tells him she assfucks him with her brown strap-on every time he takes a shit. The family calls it suicide but everybody knows the truth.

They call the war waged over race and class division The Water Wars because that name hurts less. The war is won before it begins by those who understand there was no war in the first place. Water water everywhere. Water doesn’t care that you’re there. Water keeps the devil away. Blood will spill in the water one day.

There is an archive that records everything that ever happened, is happening, and will happen. Follow the symbols and you will find it. Enter and they will force you out. Return and they will kill you. The expression of power as knowledge will destroy your life.

Teach kids that it’s not wrong to kill yourself. Bury yourself alive. Salt renders the earth dry and lifeless and infertile. Never say sorry and never say thanks unless you are speaking to God.