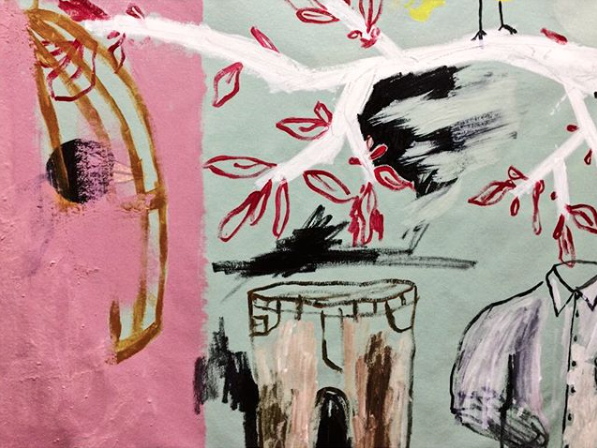 Yellow Snake was my best girl at the Mona Lisa. She was not the first girl I picked. It was my third or fourth visit there. I was walking through a crowd of girls who were washing bedsheets and towels. Just cleaning girls. They started giggling, and the girl holding my hand smiled at me and said, “They like you. They say you look like a movie star.” Like they’d seen it in a movie, they held their hands over their mouths as they laughed. With white towels and sheets in their hands, they looked like violets on paper. One girl’s eyes were so large. I asked my girl what her name was.
“She is a cleaning girl. She no good for you.”
“What’s her name?”
“I don’t know her name. She is cleaning girl. They call her Yellow Snake, because she has two teeth, like this,” and she hooked her fingers in front of her face like fangs and laughed. This girl holding my hand, she was lovely.
Prostitutes in Bangkok laugh all the time. They are the happiest prostitutes in the world. You never see a prostitute laugh in Mexico, or in the U.S., in London or in Toronto or Copenhagen. You’re always grinding away on a fat, sad human hole. It’s like shoveling mud. And in Hong Kong, when I was there, they had no prostitutes at all.
The management tried to distract me away from Yellow Snake, but then they made her a regular girl. It was a proud thing, the first time I came in and saw her there, behind the glass, on that white plywood wedding cake all the girls sit on with their numbers hanging around their necks. At first those numbers made them seem like cattle. But once I got to know them, I saw they wore them proudly. The Mona Lisa is the best and cleanest whorehouse in all of Bangkok, and Bangkok is the prostitution capital of the world. Just thinking about it now, here along in Lawrence, Kansas, with the gray sky outside my window and the Thai orchids hanging from wet trees on the other side of the world, it makes me want to go to the bathroom and jack off. Mona Lisa, my Mona Lisa, why have you forsaken me?
That night, my last night there, Yellow Snake and I were lying in the tub together. She had washed me and then given me that first hand job they give you to slow you down. Next she would give me a blowjob, still in the tub, and then the oil rub on the rubber mattress on the floor with her whole body, and the first ride, her on top, and then we’d move to the small iron bed, white pressed sheets, and the fourth and final fuck, the long one, when you tried to tear her tiny body into petals and stem and leaf. With three behind you, you lasted. They always followed the same routine, even after they had been with you several times, even once they knew just how you would be.
I felt lazy, and I could have stayed in the tub with her until the water turned cold. I was sober, too.
“You go home soon? Your wife, she misses you.”
“I don’t know. We can stay as long as we like.”
“You find big ruby you want?”
“We found a couple. But not the big one, not the one we want. So we’re still looking.”
Most Thais would offer to help you then, hoping to make a commission. Jewelry and prostitution, those are the Thais’ biggest businesses. It’s true they go together.
“What do you want, Yellow Snake?” I asked her. She wriggled around, kneeled on my chest, and tried to push my head under the water. She put both hands on top of my head and pushed, like I was a pump. We were both laughing. She hated me to call her Yellow Snake. I was supposed to call her—you know, I don’t remember.
“I don’t want nothing,” she said. “No, I want to push your head into the water and drown you!”
I slept there, that night. We were staying at the Oriental and you couldn’t bring a girl in there. Or I would have asked Yellow Snake to come to the hotel, maybe, that night. Those teeth were something, though, they really looked like fangs, and it would have been odd out on the terrace at breakfast. Looking at the Chao Phraya River, and the long-tailed boats, slender as your waist, hummingbirding up and down its brown length with propellers the side of salad plates, at the end of forty-foot poles. And the short men at their tillers in wide straw hats of yellow and red and blue and green. “Your papaya juice, sir?” “Thank you, Sam.” I sat there and wrote a postcard to my wife. They always remembered what you liked for breakfast, but still they always asked, in case you changed your mind.
In the morning Yellow Snake was there in the bed next to me where I didn’t know if she would be. She had her arms at her sides. Her face was as quiet as that one moment in making love you were waiting for, all that time. She told me a funny story about her aunt and her aunt’s pet store. I told her I would be back that night, or the next. She liked to pull on my eyebrows while we talked. She would finger them and look as though she were right there. The taste of who I am was suddenly as strong to me as coffee. I said to her, “I guess I better get going, they must want the room,” but I couldn’t pull the sheet off my body. It was already hot and I could hear the horns honking in the street below. She said, “No, it’s okay, you wait as long as you like.”