The Contagious Abortion of Cattle 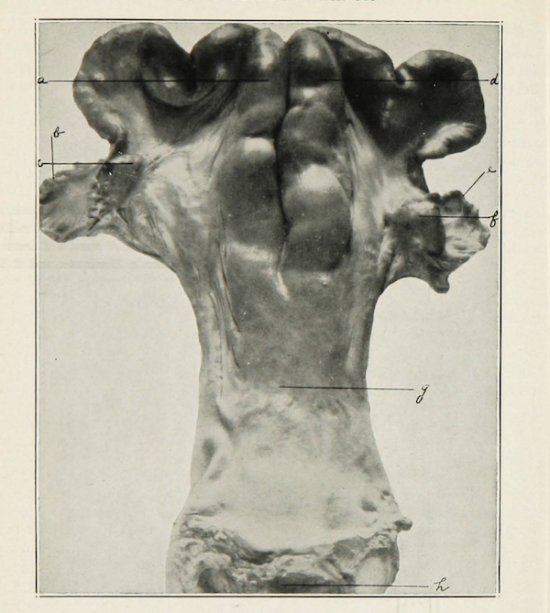 They called it the Bacillus abortus of Bang, no joke. Stockmen and dairymen shot up in the night to a pounding at the door, a light on in the barn. The disease was a killer, an unborn calf killer, second in wrath only to tuberculosis. Monetary losses were enough to make a family, the farm, the whole county go under. The spread was fast enough to show a man he had no control.
Fetuses and the accompanying discharge were burned, buried, or both. An onlooker might spit on the ground against the curse. A hand on the ranch would perform douches. This is how that job progressed: iodine, potassium iodide, boiled water, and a soft rubber tube the length of an arm. There were daily flushes of the uteri despite the cows’ protests. The hand had to be quick because the vulvas clenched.
The bull, too, needed attention. Someone to scrub its belly and inner thighs. A few men to irrigate its genitals before and after all intercourse. The weakest man would direct the hose. The strongest man would hold back the foreskin with his fists.

In Malta it wasn’t Bang, it was Bruce. Same genus (brucella, named after Bruce), different animal (goat). The goats in Malta ran through the streets of Vallaya each morning, thousands of nannies with udders so full they dragged on the ground, got muddied and scraped. A single Maltese goat is enough to nurse a platoon said the men who squatted in the gutters milking, using runoff from one tit to lubricate the next. No refrigeration meant housewives and chefs would ask for refills after lunch. Such was the paradise for the poor and wealthy alike: fresh milk and butter in the morning, cheese and ice cream come afternoon, and an undulant fever that hit peak temperatures after the sun had set. It was an island of sweaty dreams.
Thousands of British troops, not long off the boats from Crimea, drank their milk raw like the locals and soon overflowed the hospitals with shivering and aching bodies. With headaches and backaches and joint aches and homesickness and suicidal calls to Mother. The whores, too, on a street called “The Gut,” showed an upsurge of the bacteria. These women stood their ground in doorways, the fever swaying them like palms.
But it was the monetary threat of so many soldiers in bed—not concern for the women they bedded—that fueled the formation of the eradication team led by Sir Major-General Bruce.
Long history short, Sir Bruce identified the bacterium. His wife was a whiz at the microscope. But the Major did not attribute much to that wife, nor did he listen to the local doc who realized the fever spread via goat.
Long history longer, eradication took ages. Cooks ordered to boil milk snuck cool liquid into their pots. Diseased goats taken to slaughter were slippedlive out backdoors to their original owners. The government even proposed a cow-goat swap, but that was soon aborted. You see, the cows became constipated and their milk tasted like crap.
Condensed milk in cans was the only workable prescription. The military made it protocol and the hospitals dutifully emptied out. The rich folk, too, got hip to cans, thanks to an ad telling them to act more British. But a taste for goats’ milk— raw from the source—lingered long within the citizens of Malta. Even as factories sent out sterile milk in electric vans, goats passed between phantom herds across the limestone steppe, evading authorities, spreading the bug.
This is how a middle-aged tourist on a Mediterranean vacation in 1995 ate a savory cheeselet, caught a fever, and died.

They say bacterium is the most abundant form of life. They say the father of microbiology counted more organisms in his mouth than men on the planet. They say antibiotics are no longer working and Russians are reactivating a biological weapon based on Bang’s abortus.
They say the milk at the bar is half water, two percent anthrax—that other bacillus. Ninety percent of all genetic material in our bodies is not human, they say. They say we are just a habitat for microbes, a scaffolding, a shell. Women in Beijing, we know, are lactating from super bugs in skyscraper byproducts. Mammal-less milk secreted from GMO yeast was conceived by bacteria in the brains of Do-It-Yourself scientists. They say bacteria was here first, it came from outer space. Bacterium will be here last, it can now bind to silicon.
But in Sydney it has been officially declared: bacteria are our friends. A larger than life colon is being erected—a monument to how bacteria helps us digest.
Bacteria will be celebrated once a year with wine and sourdough bread. There will be an oil spill in the Gulf of Carpentaria so bacteria can have a feast. The stance in Sydney is not to worry so much. The idea is to whistle while soaping your skin, to sing while rinsing your genitals after sex.
The idea is to drink milk and sleep through the night. Hush now, that light on in the barn is just a bio-luminescent e-coli bulb. That vibration in the earth is only bacteria recomposing new soil. The children may be dirty, but their immune systems are strong. Human newborns suckling peptide-laden milk in the pouches of marsupials are growing at incredible rates.