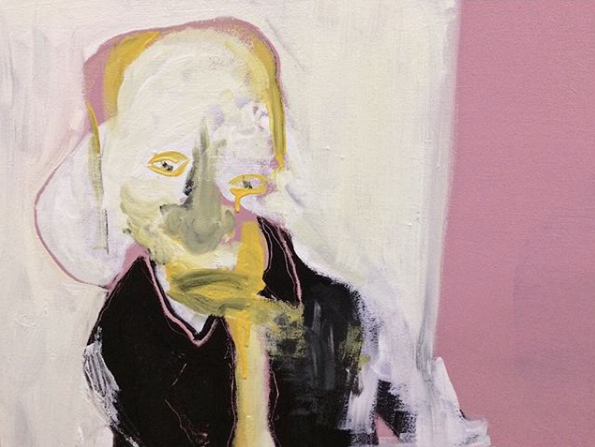 Mrs. Krummholz dipped her bread in a cup, watched runnels of coffee drip through the tunneling inside the crust. She brought the bread to her mouth, tipped her head back, and closed her fist around the bread like a wrung sponge. The bread cracked and coffee and cream slid down her tongue, pooling sweetly on her palate. Mrs. Krummholz swirled the liquid around her tongue, then opened her fist. The crumpled bread dilated in her palm, now specked with wet crumbs. She set the bread down on a saucer and eased up out her chair. She stood and stared into space, swirling coffee in her mouth all the while. She moved around the kitchen freeing surfaces of mostly invisible matter. She turned on the faucet.
She opened the fridge, peered around, smelled around, and closed it. She raised her hand to scratch her scalp and watched flecks of her skin drift down to the floor. She went to the broom closet and put her hand on the knob and stared into space. She opened the door and grabbed a broom, its corn worn down to the wire. She folded her hands on the top of the stick and clutched it to her chest. She traced a figure eight on the floor. She put the broom back in the closet. She walked to the sink and she shut off the faucet.
Mrs. Krummholz remembered the coffee in her mouth and swallowed every drop in a polite little gulp. She licked the dregs off her palm and stopped and stared into space. She remembered being younger and biting her hand after someone accused her of being sour. She had bitten the part of her hand between her thumb and her index finger, hard enough to coax some blood out, and swallowed in a polite little gulp. She’d unlocked her bedroom door and walked in humming.
Mrs. Krummholz stopped staring into space when she heard the radiator. She finished licking her palm. The radiator steamed in spurts and sounded like a shivering.
Au lait, she said, aloud, alone, and then the doorbell rang. She stood twisting the small hairs of her chin, watching sunlight on flakes of her skin. The doorbell rang again. She wiped her palm on the seat of her pants and sang cheerfully, Coming!