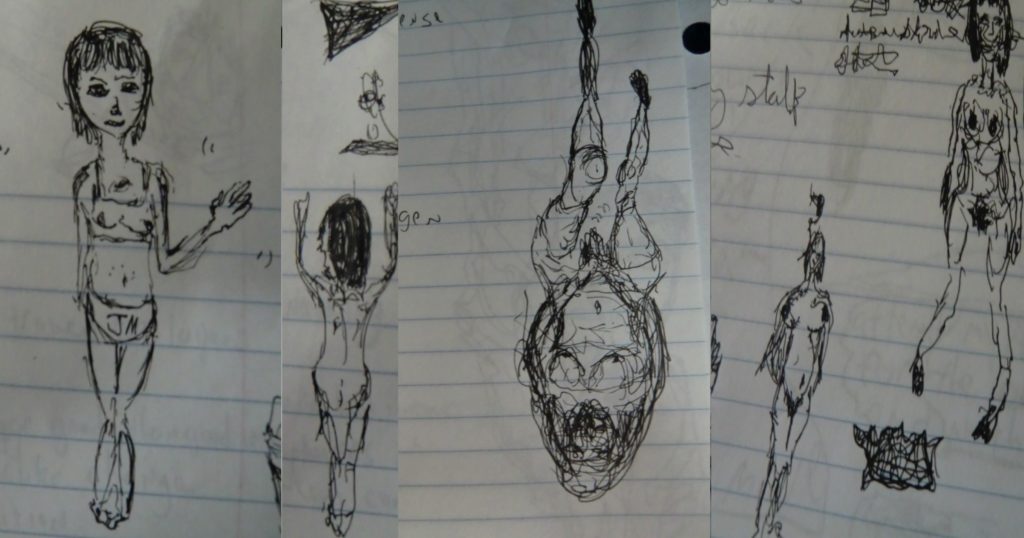 A sponge dipped through my own green shit so I could see. Crinkling exam table paper split agnate with shrieks begging for more cunt-water on the lung. Fluorescents tarred above a deflating womb. Latex shoved between glans and fledgling hood, spores jockeying north to partner the wreck invading my sinuses. I had bowel content sneezed deep into each eye. A little extra stowed away during the entirety of this planet’s introduction. Made contagiously human, a living pockmark overly incubated, I passed in septic folly before these beings in white who squat to ensnare, repelling the rest of my foreskin with a scrunchie, gobbling skid marks off the ass-end of many a G-string, deep in that asshole where I heard meals cooing ready for another bloodier round of diaper, every missing hymen like an accordion hung from a swing set. My dick-meat was too thick for shears. Enlisted into the worldwide barbecue by muscles I turned saggy, blowjobs traced on the wall instead of circumcision. Back home, our dog gave up playing Romeo and Juliet with legs and drowned himself in the fishbowl, fish doing grim reaper somersaults inside his guts, strung there welcoming as any family. I filled my diaper with an erection. The moon sunk low enough to wear it as a feedbag. His craters amassed with period, the dead egg sacrament, territories slurped free of kin, hushing about how we are all one on his big receipt. I started to institutionally boing the escape pod held back by masking tape troubling my pillows and tracked down copious lactate. My cavernosa bent around corners to huff a bitch pulling strawberries out her yoni like yoga in a commercial for the sun. Sunlight went corporate on the Peyronie’s marionettes below, puppets leaking smegma from the gap where discussion once occurred. The sewer brimmed with reptiles impaling themselves on toys, chucking used condoms at our bikes, copulating steams that permed the air. A girl picking daises skipped over and presented me the stems, popped off heads smooshing along her collarbone. We awoke upside-down in a trashcan days later, coughing each other’s hair back and forth.