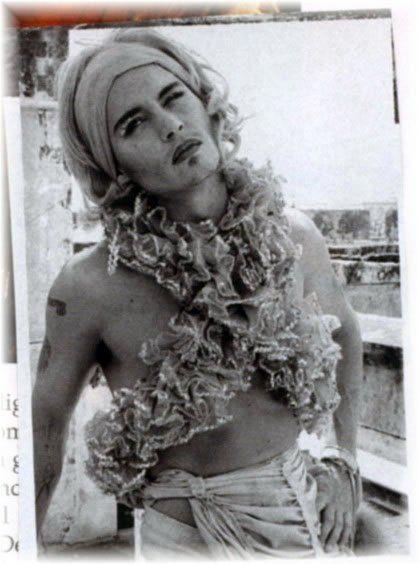 Mildred Thorn was surely much too old for such things. He recognized in her a desire to be blindfolded, or so he thought, strange as it sounded. He helped his mother take care of her on Tuesdays and Wednesdays when his mother wasn’t working at the halfway house outside of town. Mildred Thorn was not so old she couldn’t communicate with him or walk to the bathroom on her own. She was forgetful of medication and needed someone to help her with laundry and meals mostly. Poor old woman, she needed help. He didn’t think of her as elderly. The more he was around her, the more he discovered Mildred Thorn aroused something in him he couldn’t define or understand, not at all, not under the odd circumstances of helping her into the tub.
For instance, any time she needed to wash her hair in the tub he would volunteer to do it, which pleased his mother a great deal. That’s nice of you, his mother said. Please do! He understood the physical act of washing Mildred Thorn’s hair, helping her lean forward to the spout and pouring a long drip of shampoo into his hand and massaging it around in her hair. He liked doing this. He imagined she was sucking his cock while he massaged her head and thought: this is what it would be like, massaging her head while she sucked my cock.
Keep your eyes closed, he told her while he massaged her scalp. Keep them closed now, hear?
He enjoyed thinking about Mildred Thorn in such a sexual way. Part of it was the way she leaned forward in the tub, or maybe it was her frail body and loose skin, but more than that it was the actual act of massaging her head with shampoo and pretending she was sucking his cock.
He wondered what it would be like to fuck Mildred Thorn. She wasn’t so old she couldn’t spread her legs and fuck. She was surely capable of experiencing pleasure. To blindfold her made the thought even more exciting. She wouldn’t be embarrassed. After all, he had helped her into the tub and washed her hair. It would be a sort of game.
One night in a bar on Third and McKinley he drank whiskey and tried talking to a woman about it. This is a secret desire of mine, he told the woman, to blindfold and fuck someone. Or maybe to be blindfolded and fucked, too! Maybe it’s a secret desire of most men, eh? Do you think men need to be the ones doing the blindfolding, or should they be blindfolded? What about the fucking? What is it about the blindfold? Could Mildred Thorn want to be fucked?
You’re drunk, the woman said. Who is Mildred Thorn?
Mildred Thorn, he said. An older woman my mother takes care of, he said. A woman who lives alone in an apartment with seven cats. A woman too old to remember things. But not so old she’s bedridden or an invalid. Mildred Thorn, who walks hunched over. Mildred Thorn of white hair and loose skin.
Well I think that’s just sick, the woman at the bar said.
He looked into his glass of whiskey and tried to think of something nice to tell her.
Goddamn creep, the woman said.
The next Tuesday, he asked his mother, in front of Mildred Thorn, if a woman likes to be blindfolded and fucked, at what age does it stop.
Quit talking trash, his mother said.
But as he said this he could see in Mildred Thorn’s face something form. Maybe it was an expression of desire. Blindfolded, she wouldn’t have to look at him or see his face or body. He could do whatever he wanted and tell her to think of someone else. It would be better than she imagined. It would be a sort of game.
Later, while his mother sat smoking at the kitchen table, Mildred Thorn had a violent coughing fit and brought her hand to her mouth. Her eyes watered and she looked at something on the floor.
Wipe that phlegm off her hand, his mother told him.
He took a tissue from the table and wiped the phlegm from her hand.
Wipe her chin, his mother told him. Wipe that phlegm from her chin.
He wiped her chin.
On the street outside, a garbage truck making noise drove away.
That must be the garbage, Mildred Thorn said.