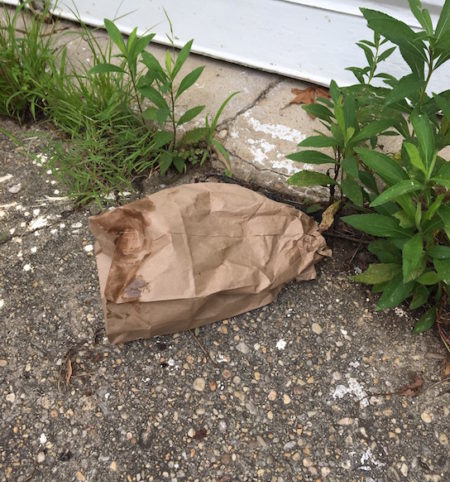 It’s about samosas. The punk rocker. She needs to know if the clerk mixed them up. She’s a vegetarian. A personal choice she takes very seriously. But from the look of his shrugged shoulders as he hands her a greasy brown bag. He doesn’t really give a shit. And neither do I.

I’m anxious to get home. To shut the door and turn the lock on everything behind me. Like the long day standing. My sore back. My knees. But the five punk rockers in line. Each with a handful of cheap beer and canned stews. Are directly in the way of things.

At first glance. I assume they’re together. Their purchases. Their uniforms. But I’m wrong. So I stand there. Like a wildlife observer. Fucking sick patch man, one says to another. Who turns around. Sizes up his admirer. Then lets out a chuckle so incredibly dumb-sounding I feel bad for him.

Thanks bud, my girl got it for me at a show, he says. Then he jerks his thumb in the direction of the counter. At the girl who’s still arguing with the clerk about her food. To which the clerk helplessly replies, just go home and cut them open.

An easy solution. But she won’t hear it. She’s turned around now. Posturing. Flapping her gums. A filthy denim-jacketed punk gapes and gaws. And I think they’re all fools. A thought flashes across my mind. Maybe that’s why you don’t have any friends?

But there’s no time for wondering. I hear a disembodied voice. Coming from right in front of me. A short man standing there. A dozen tallboys under one arm. I can’t believe I didn’t notice him before. So I’m startled when he yells out, Whelp, you might gotta fancy jacket, but I gotta waaaay better hat.

His extravagant claim stops everything. The clerk. The gaggle of punks. Me. We all turn our attention on the small man. No bigger than four foot three. Who, once scrutinized. Looks incredibly drunk for this time of the day. Trying to keep it together long enough to get more beer.

We’ve all be there before. But he can’t hold his mouth shut. I step back. Something’s about to go down. My mouth is dry. I wonder if the clerk’ll turn a blind eye? And let me open a beer?

So I stand there. Thirsty. Watching as the little drunk man taunts the punk. Pointing up to the brim of his baseball cap. I need to get a better view. So I take a step to the side.

And Christ! When I see the hat. I wonder why no one has made fun of it already? It’s ridiculous. Instead of a logo. There’s a plush ladybug three times the size of my fist. Once bright red. Now mottled. Like a dead cat in the gutter after a heavy rain.

Nevertheless. The little drunk is beaming. He’s certainly proud of the god damned thing. It probably reminds him of better times. But the challenged punk. He doesn’t look even mildly impressed. And waves it off like it’s the kind of thing he see’s all the time.

Which gets under the skin of the short drunk. He huffs. He grunts. Stomps his little sneakered feet on the yellow tile floor. Takes a confrontational step forward. Then only inches from the chest of the punk. Fever in his eyes. Swaying slightly. He says, lemme show ya sumt’in ffffuckin ‘mayzin.

He reaches up to the side of the hat. Where a small plastic ring dangles. Attached to a cord deep in the heart of the ladybug. He pulls it out. Then as he lets it go. The greying toy farts to life. Buzzing and vibrating. Accompanied by a soft tune I have to strain to hear.

And when its display comes to a jerking halt. He’s smiling like he discovered science. His excitement throwing a real pathetic shadow on things. The air heavy. So when the punk replies that it’s the best fucking hat I’ve ever seen. He opens up his chest to show his heart.

Whadda tell ya, the little drunk burps out, fffuckin sssweet hat, no? The punk nods his head. His girlfriend grabs him by the arm. He steps up to the counter. Drops his things. And starts counting his change.

The clerk rings him through. Then places his beer and toilet paper in a grey plastic bag. The punk couple make to go. But stop. Lock arms with their new friends. We’ll see ya around one of them says. Knuckles are bumped. Chuckles flow forth. My eyelids flutter.

After that another punk pays. Another punk goes. Dinner and cocktails sorted out. Until the little drunk goes up. Drops his beer on the counter. He tells an offensive joke. And instead of laughs. He’s told to pay. Which he does without saying a word. He hefts his beer and walks out the door. Then it’s my turn.