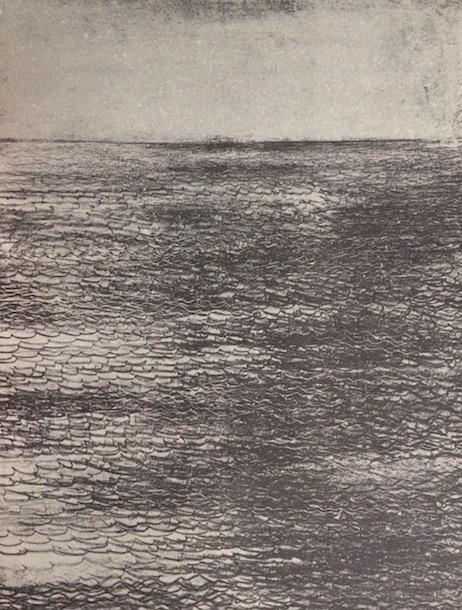 The promenade was greasy and Jim lacked magnificence. The breakfast beer that came in a can with a golden hawk on a black background was stale and warm. His tuxedo was wrinkled but the bowtie had retained its shape on the long walk from the wedding in the neighbouring town. Jim had left behind his car and his oldest friend, Chris, who for the last eighteen hours had been married to Jo—who he was trying to forget.

A woman in chef’s whites and blue-checked trousers with a stubby blonde mohican swaggered across the street, stopping cars. Drivers honked and swore, leaned out and v-signed. The woman crossed the tramlines to the sea-facing railing and Jim.

Goosey took out a blue and white pack of cigarettes, shook one out and lit up. She blew a cloud of tar-black, noxious smoke that caught at Jim’s throat, as the late night fumes from the chemical factory used to do when they’d seep into his childhood bedroom. Jim resisted coughing as long as he could. The strain bent him over double.

‘My dad used to smoke these. They don’t make them anymore. He bought a job lot when he found out they were going to be discontinued. Put them in a lock-up garage near the airport. He died six weeks later. Left me the key.’ She pulled hard on the filter. ‘I should be more grateful.’

Jim looked up through watering eyes and caught a breath.

‘I’ve worked out I’ve got thirty-two months left. Of smokes. Don’t know what I shall do then.’
‘Give up.’
‘Ey, ya funny bugger.’

Goosey crouched, tapped her cigarette out on the pavement, put the half left back in the carton.

Jim tipped back his can, swallowed.

Goosey hitched up her trousers and tugged down her jacket.

Goosey and Jim looked out to sea.

Goosey turned about and stepped directly in front of a tram, which juddered to a halt. Cars swerved and stopped, drivers swore and gestured: two, or fewer, fingers. Goosey didn’t look back.