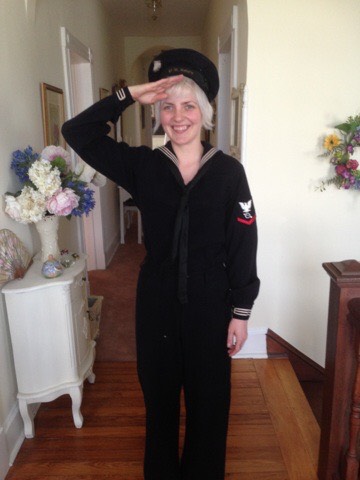 NOT A NAVY THING BUT INTERESTING:

we had been excitedly talking about my ‘realistic course of action’ that would result in me becoming an astronaut. dad said ‘did i ever tell you about the astronaut who put his thumb—’ i smiled and nodded and made a ‘squinched-out’ thumb gesture. dad continued ‘well, so i guess he became some kind of preacher after this. he has a following. after he figured out you can do that thing, blot out the earth with your thumb, it’s just this tiny dot.’

a little later dad said ‘this story is a little embarrassing but i’ll tell it anyway. so, the astronaut who did the thumb thing, he apparently grew up in chicago in this poor neighborhood where the walls were paper-thin, and his bedroom—he lived next to the mcmanus family—his bedroom was right next to mr. and mrs. mcmanus’ bedroom, so he heard everything. this might’ve been another astronaut, this might’ve been neil armstrong. anyway, so one night he hears mrs. mcmanus [looked away and sort of chuckled], mrs. mcmanus from the bedroom, she says ‘i’ll put that thing in my mouth the day they send a man to the moon!” dad laughed and i laughed a little less. i said ‘oh noooooo. no way. you’re making that up, that’s not real.’ dad was still laughing. he said ‘no, it’s really real—they asked him what he was thinking about when he landed on the moon, so that’s what he [continued laughing].’ i laughed a little more.