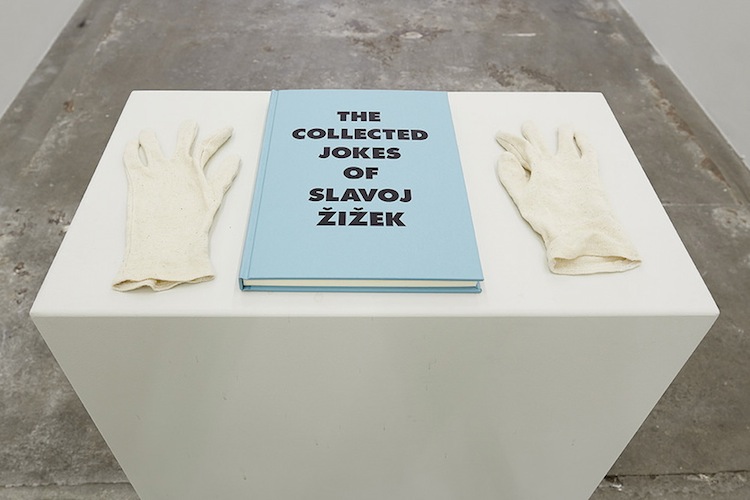 Editors note: The following jokes are from The Collected Jokes of Slavoj Žižek, a compilation of jokes found in the bibliography of Slavoj Žižek, edited by Audun Mortensen, and originally released as a one-of-one coffee table book [pictured above]. The book was first published by Flamme Forlag in Norway (which the following are excerpted from), then by MIT Press, under the title Žižek’s Jokes (which you can buy here). Enjoy!

In an old Slovene joke, a young schoolboy has to write a short composition entitled «There is only one mother!,» in which he is expected to illustrate, apropos of a specific experience, the love which links him to his mother; this is what he writes: «One day I came home from school earlier than usual, because the teacher was ill; I looked for my mother, and found her naked in bed with a man who was not my father. My mother shouted at me angrily: ‘What are you staring at like an idiot? Why don’t you run to the fridge and get us two cold beers!’ I ran to the kitchen, opened the fridge, looked inside, and shouted back to the bedroom: ‘There’s only one, Mother!’»1

Recall the well-known joke that perfectly renders the logic of the (in)famous Hegelian triad: Three friends have a drink at a bar; the first one says, «A horrible thing happened to me. At my travel agency, I wanted to say ‘A ticket to Pittsburgh!’ and I said ‘A picket to Tittsburgh!’» The second one replies, «That’s nothing. At breakfast, I wanted to say to my wife ‘Could you pass me the sugar, honey?’and what I said was ‘You dirty bitch, you ruined my entire life!’» The third one concludes, «Wait till you hear what happened to me. After gathering the courage all night, I decided to say to my wife at breakfast exactly what you said to yours, and I ended up saying ‘Could you pass me the sugar, honey?’»2

Today, the old joke about a rich man telling his servant «Throw out this destitute beggar – I’m so sensitive that I can’t stand seeing people suffer!» is more appropriate than ever.3

It brings to mind a well-known Soviet joke about Lenin. Under socialism, Lenin’s advice to young people, his answer to what they should do, was «Learn, learn, and learn.» This was evoked at all times and displayed on all school walls. The joke goes: Marx, Engels, and Lenin are asked wether they would prefer to have a wife or a mistress. As expected, Marx, rather conservative in private matters, answers, «A wife!» while Engels, more of a bon vivant, opts for a mistress. To everyone’s surprise, Lenin says, «I’d like to have both!» Why? Is there a hidden stripe of decadent jouisseur behind his austere revolutionary image? No – he explains: «So that I can tell my wife that I am going to my mistress, and my mistress that I have to be with my wife …» «And then, what do you do?» «I go to a solitary place to learn, learn, and learn!»4