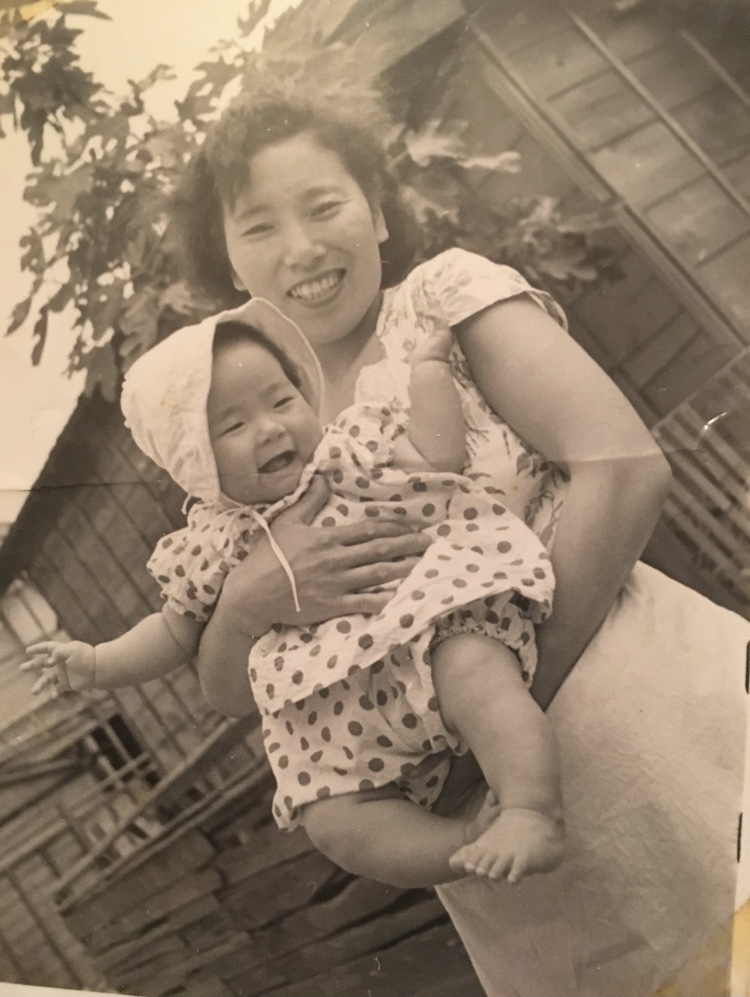 Mari, Papa, and I, with you in my tummy, went to California, to visit family and old friends, from December 17, 1990, through January 7. Your due date was February 6, so we came back about a month before. I was thinking you might pop out while we were in California, but it was good that you remained where you were.

I was taking a training course to be a simultaneous translator then and was hoping that you would be born after February 10th to maintain my required attendance.

So looking forward to the moment of meeting you.

Our midwife, Mrs. Fukuoka, said the labor should be within 2-3 days. She said your head was hard and well-built. I was hoping that you would be a sturdy and healthy baby.

I was feeling under the weather last week and rested for a couple of days. But I feel better and ready. Your bed is all prepared. I have a feeling you are a boy.

It started around 7 a.m. Every 10 minutes, pain like menstrual cramps. I was sure by 8 a.m. that you were ready. Mari, Papa, and I took a shower and got ready. We arrived at Mrs. Fukuoka’s house around 10:30 a.m. by taxi. Mrs. Fukuoka suggested that I take a bath and relax. Mari joined me. The labor pain came every 5 minutes. Mari was rubbing my tummy and talked to you, “Your sister is here by you, you don’t need to cry, OK.”

Because Mari’s labor took 38 hours, I was hoping that this would be shorter and a daytime labor, and you heard my wish! You arrived at 4:01 p.m. Mari was happy to meet you too!

Looking at your handsome face, I thanked you for your collaboration and was happy and satisfied with how the labor went.

You started crying in the middle of the night from 1 a.m. all the way through 3 a.m. I was at a loss of what to do. Mrs. Fukuoka came to our room after 3 a.m. and took you away. She told me later in the morning that you went to sleep after she laid you down on your tummy.

Mrs. Fukuoka brought you back to me by your morning bathing time. You had a big appetite. Mari, Jiji, Baba, and Papa came in the afternoon. Mari was holding you, kissing you, and trying to feed you sugar water from a bottle, enjoying being a big sister. Papa and Mari were really happy that you were a boy.

You cried powerfully in the middle of the night last night even after you were fed and your diaper was cleaned. You slept well during the day.

Mrs. Fukuoka took care of you while I took a bath all by myself, which I’d never had a chance to do in the three years since Mari was born. I gave you a bath for the first time but I was rusty and a little clumsy . . .

Ma-chan came to visit us. This was your first time being held by someone other than the family. You showed her a big smile. I noted that you got it from Papa. While Ma-chan was there watching you, I was asked to support a labor by Mrs. Fukuoka. While I was guiding the last-minute breathing, a head came and—quickly done! The baby looked much much smaller compared to you. I thought it was not fair . . .

Tomorrow we will go home. We should get a good rest tonight.

My wish for you: be a beautiful, independent, intelligent, and gentle person.

Marie was anxiously waiting for you, her hands washed and ready to hold you. She was so happy, jumping up and down.

Your umbilical cord fell off.

Your kick was powerful and it was very challenging to change your diaper. I actually felt this kick when you were in my tummy, which made me think you were a boy. Your neck was also strong and you were already turning your head side to side on the second day.

You continue to cry hard to be fed in the middle of the night for 3-4 hours and sleep peacefully during the day. I was exhausted . . .

Brought you to Mrs. Fukuoka for a check up. Your weight was 200g lower than your birth weight. Mrs. Fukuoka suggested to add powdered milk in a bottle. No wonder you kept crying in the middle of the night!

I was going to give a bottle twice a day but realized that my breast milk was not enough. As soon as I started adding a powdered milk bottle, you became satisfied with feeding every 3 hours and no longer cried in the middle of the night.

Your face was becoming more gallant? manly? and your hands moved actively. You laced your fingers, placed a hand on your cheek with fingers spread, then balled into a fist, as if trying to figure out what they could do. To feel what they feel.

I needed to increase the powdered milk because you showed your dissatisfaction with your entire body, lying on your tummy, kicking and moving forward 5-6 inches. I was worried that you might hit your head against the fence of the bed.

Still staying awake at night from 9 p.m. for 5-6 hours and sleeping soundly during the day. But when you were awake you smiled a lot and that made me happy and encouraged me.

You started sucking your fingers a week ago. Sucking your left fingers and pulling the hair on the back of your head with your right hand. Whether you laid on your tummy or back, you moved and I needed to be careful so you wouldn’t fall. You seemed to be able to see me from 6-7 feet away.

You started grabbing clothes or the belt of the baby carrier really tight when I held you. When I took you to Mari’s shamisen lesson, you were smiling surrounded by the old geishas who were there at my shamisen teacher’s house. Because Mari was more demanding when I was taking lessons, you were considered more agreeable than Mari by those ladies. They said you smiled differently when you saw me. I wonder whether you can recognize your mama.