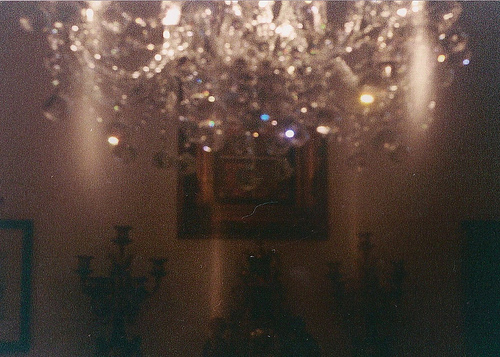 Then they took me to the beauty room, and there it was very bright. It was so like a dentist that my teeth felt loose and chewy. They heavy-handed me onto the table, but when I was on there, then their touches were light and fussing. Even the things that had been bad were good now, like, say, my fat arms, which had lost their mottle. It wasn’t like I was above myself looking down, but like every nerve in me could see. I could see that they used synthetic brushes. I could hear, too, the clack of plastic. I prefer to use those stubby little crayons when I’m making up. Call it controlled bruising—blabbing lilac on the places where the bones confess.

When they were gone the woman came in. She had a big sewing box with a squashy top. The woman wore a meaningful look, but the meaning was set in so deeply, I could tell she wore it even on the bus. From the box she took neat nail scissors, a needle, red thread, tracing paper, a wine glass wrapped in newspaper. She traced the base of the glass on the paper, roughly cut around the circle, and when it was freed she cut again, neatly. She peeled back my plastic underwear, said, Let’s Take a Look at You. Then she stitched the circle deeply into me. Next she washed her hands in soap that smelled green and almondine, like the skin of a pear. When it was done they came and dressed me up in crushed velvet. The dress was long and lined and they did not put me in tights. They crippled me with a silver hammer, finished my face by placing pearls under my eyes and across my cheeks. I was moved again to a cabin bed among the old furniture that had not been cleared from the crypt. I felt like a baby. No one had supported the back of my neck.

He looked weak, but he swept everything off the altar, and then he was just like the man in the movie. When he tore through the paper, he gargled his breath, and said Jackpot! He washed me with a packet of wipes and put me back in bed. He was sweet with aftercare. He even left a slice of cake on a plate while I played dead. The icing was neat, with crispy sugar roses, but the sponge was tobacco-black and boozy. He said, You’ve Made a Something Man Very Happy, and went. The woman came back and washed me again, rougher and thorough. She wiped me with a square of muslin, plain warm water from a long flask. She took a samemade circle of paper, stitched it in to replace the other. She took two short bites from the cake, leaving marks in the icing. He came back again and when he saw the cake his eyes were wide and he smiled. But later, on the altar, he began to shake me, saying You! You are Such a Liar!