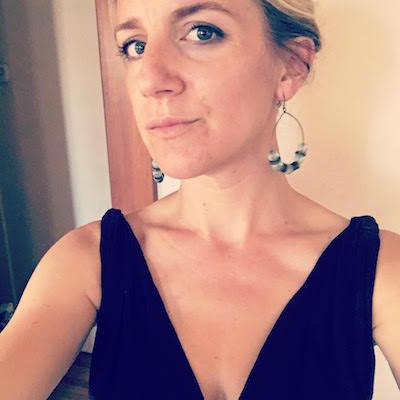 Remember when someone brought a boom box to the first cross-country race of the year and we heard Dookie for the first time? I bombed that race, crumpling to the ground halfway through, riding out the mental breakdown, and then getting back up and finishing, slow, not last place but last place enough. You were amazing, you came in third, and everyone patted you on the back and said, “Wow, I never knew you had it in you, you’ve been holding back!” The varsity girls all hugged you and told you jokes and your white teeth shone in the late sun. I felt a mixture of anger and sadness and not giving a shit. It felt decades old, like I was someone else, but I hadn’t changed a bit.

I was sitting by myself on the bus ride back to school when the chaperone confiscated the CD. But she was too late, we’d already heard I’m taking pride/in telling you to fuck off and die. We’d already heard it.

I didn’t really know what James wanted from me but my bedroom door was closed and he’d brought a Maxwell cassette copy of this CD over because I didn’t have a CD player in my room yet. He pressed play and I pressed up next to him on a corduroy-covered beanbag and giggled at the record scratching noise, not because I thought it was funny or stupid but I was so nervous to be alone with him. He said, “Shh.”

It all got intense and dark so quickly, he and I, and I didn’t know what I was doing, I’ll never know.

He wasn’t my first. He wasn’t anything.

He kissed me on the mouth when Sour Times started but by the time the song was through my mother called up from downstairs that there was a phone call and it was for him and it was a non-descript emergency and he left. I didn’t hear from him again until Monday, when he was holding Cara Gorski’s hand.

I’ve only ever listened to the first two songs.

At the pep rally, early October, hot as fuck, we felt ridiculous. All sports teams had to be on the football field, prey to the reluctant crowd of non-athletes in the stands who were glad to get out of sixth period but still hateful nonetheless.

We wore our street clothes: cut-off jean shorts, Converse, t-shirts. Cara Gorski wore a flowery Millers Outpost dress and Keds, of course. None of us wanted to wear our cross country uniforms like the cheerleaders and the football players wore theirs, for one because our uniforms were pornographically revealing, and for two because the less we felt like cheerleaders, football players, the less we felt like jocks, the more we were okay with standing down here on the still-damp grass.

“Whatcha thinking about?” you asked, turning slightly away from the other girls to face me, your hands on the top of your head, elbows askew.

I stared at you. The music stopped mid-line with shrill feedback, someone in trouble and none of us even cared. We didn’t gasp, we didn’t laugh, nobody wanted to give any shits.

The first of us to die was someone on Yearbook.

“Typical,” you said. “They’ll probably get like a full-page tribute.”

You put a stuffed animal on the edge of the entry gate like everyone else. I recognized it; it’s one that last year’s boyfriend gave you for Valentine’s Day.

“I’d’ve wanted to write my own yearbook tribute,” I said. “Before offing myself.”

Your eyes snapped up to mine. “You really think she did it herself?”

She lived and died in the rich part of town, driven in each morning by her rich mom to our school probably because the test scores were so good. None of us would want to come to this wasteland otherwise. For the memorial, your sister drove us, windows down, further than we’d ever really driven, outside of our boundaries. Exits to freeways, twisted like knots on fingers, jewels cleaving skin between breasts. Your sister’s car was a piece of shit, an old VW with a new tape deck and turquoise paint job. Gone savage, we shout, for teenagers with automatic weapons and boundless love.

She’d shot herself in the chest, a suicide.

She’d shot herself in the chest, twice. Who knows.

After the funeral, we didn’t listen to the rest of the tape on the drive home. You didn’t even roll your window down. I think you were scared.

That next yearbook had two pages for her. One for her, one for suicide prevention.

When Cara Gorski died, the eighth death so far this school year, they took James in for questioning and we didn’t see him at school again. I think he was transferred to a different school to protect him. I think his parents worried he’d catch it, the suicide bug. Or maybe his parents worried it wasn’t suicide and that we’d kill him next.

At the Dairy Queen after school you told me you’d seen James that night, the night Cara died.

“Yeah, he wasn’t with her. I’m–” you trailed off. I looked at your legs, stretched out straight like a plank of wood beneath the metal table, your calf muscles spectacular, and I thought about how we used to be the same, you and I. “I’m his alibi.”

You can’t resist her, she’s in your bones. She is your marrow, and your ride home.

“What were you doing with James?” I asked, quietly. I didn’t know what expression to put on my face so I took a bite of dilly bar and the cold hurt the new cavity in my incisor.

“I hate this song,” you said. “But how cool would this job be? You don’t have to listen to the radio all day? You can play your own shit.”

“Have you seen James?” I asked, a different approach. “Since?”

Only in dreams, I thought.

I probably didn’t either, I guess.

We heard the fuzzy click of the tape stopping, but the worker was cleaning the ice machine and didn’t notice so you finished your blizzard in silence. It stayed silent until we left.

NO NEED TO ARGUE

“Hey,” you said. You’d stopped calling me on the phone, at least nothing like last year, when we talked every night, about school, about practice, about boys, about girls, about our parents, about god, about Clearasil. “What’s up?”

I pictured your room. Had you changed your Strawberry Shortcake curtains? I hadn’t been to your house since last Christmas when I dropped off a present for your parents from mine and your mom ushered me inside like a lost kitten. She fed me powdered iced tea and Twinkies like… a lost kitten with a sweet tooth.

On the phone you said, “I’m just kind of missing us.”

I breathed deep. I wanted to be cool. I didn’t want you to know how much I’d already missed you. How I’d finished all the missing already and now I was all done missing you. I wanted to tell you that it’d be okay, you’d get over it eventually, too, like I did. Give it a couple of months, I wanted to say. Maybe like twelve months.

I put No Need To Argue on and skipped all the songs, my new CD player making a muted second-long buzz with each skip, until I got to the very end. The other songs were too upbeat or too angry or too political and I just wanted the saddest one.

“Well,” you said. It had been thirty seconds since either of us spoke. “I just wanted you to know that.”

“I’m glad to know,” I said, another thirty seconds later. Remember when we used to never be able to get a word in with each other? “Do you still have your Strawberry Shortcake curtains?”

“I gotta go,” you said, and you hung up the phone.

I put the song on repeat and climbed into bed. It was still playing when I woke up at 2 AM, completely sure. I grabbed the phone, the curly cord pulling pencils and a glass of water off my nightstand, and I called you back. I called you back at 2 AM and nobody answered. Nobody answered because nobody was home because you were all at the hospital, your mother and father, your sister, and you, the tenth now, unresponsive.

James came over a week later to talk (this this this is not really happening) and I told my mother that I couldn’t come to the door.

“Mom,” I said. I didn’t want to explain it all to her. Where would I begin? No, it was too much work to start from scratch with her. “I don’t want to see him.”

I went downstairs anyway. Found him standing in the middle of the kitchen, not touching anything, bow-legged, not even as good-looking as I’d remembered but I felt weightless anyway.

“I brought you this,” he said, handing me a plastic-wrapped CD. “It was her favorite.”

I didn’t take the CD from him. I’d never heard of her and the singer on the front looked so much like you. He shook his wrist a little, an offering. A truce. “Take it.”

I stared at him.

“I’m pretty sad,” James said, and he set the disc down on the kitchen table.

He turned around, and left, and before I heard the click of the door I’d ripped the plastic wrap off and damaged the little hinge-nubs prying the case open. I ran upstairs. Pressed play.

From my window, I could see James standing next to his car, his dad at the wheel. I wondered what he’d told his dad to get him to drive him over here. I wondered, for a second, if he gave all of your new friends a copy of this too, but I was suddenly absolutely sure that he did not. I was absolutely sure that none of your new friends mattered to you like we mattered.

Julia Dixon Evans is the author of the novel Other Burning Places, forthcoming in 2018 from Dzanc Books. Her work can be found in Barrelhouse, Paper Darts, The Fanzine, Hobart, and elsewhere. She works with the literary non-profit and small press So Say We All in San Diego. Twitter: @juliadixonevans