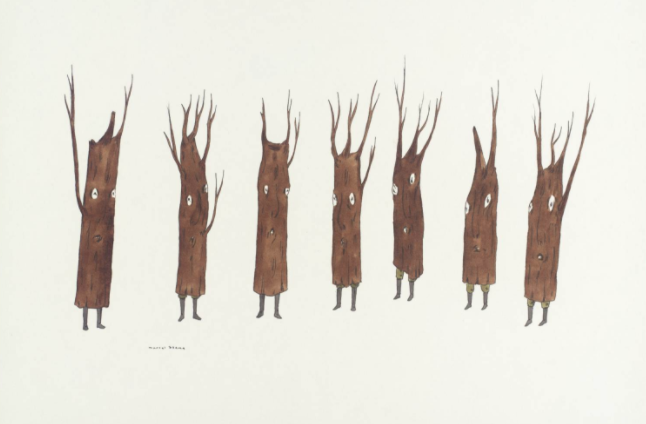 Have you heard the story—about humans eating humans? No. Not about the famine in Russia. This one happened long ago in Japan. An old woman was eaten by an old man.
Why did the old man eat her?
It was all part of a plot, concocted by an evil, old raccoon. First, the raccoon killed the woman, then it assumed her form. When the man came home that night, the woman greeted him with a plate of what she called “the finest raccoon meat.” The man devoured the entire plate, not in the least suspicious of what he ate.
I’m sure you’ve heard this one before.
Yes. That’s it, Kachikachi Mountain. It’s an old fairy tale.
Wait. You’re laughing. Don’t you know this is a terrifying story? An unsuspecting husband feasting on his wife by deceit of a tiny beast. I can’t think of a more terrifying story.
And, more than terrifying, the story has a subtle moral point, that we humans will gladly eat the flesh of our own, given that we’re blind to what we eat. Inside us all, the story is saying, there lives a ravenous beast.
Now, returning to the tale of our raccoon, I’m happy to say that it ends on a satisfying note, with the raccoon perishing at the hands of a rabbit.
Consider this death scene closely—
The raccoon on its mud boat, ferrying firewood. The firewood goes up in flames. The raccoon and its mud boat sink into the river…
This is the rabbit killing the raccoon.
And to think, a rabbit; yet another tiny beast.
I can’t think of a more profound story than this. Every time I ponder it, it puts me in a solemn mood, for it reveals the foundation on which man’s prosperity is built: beasts killing other beasts. A story that would make Zarathustra proud.
You’re still laughing. Well, go ahead. Laugh, laugh. You have the ears of a raccoon.