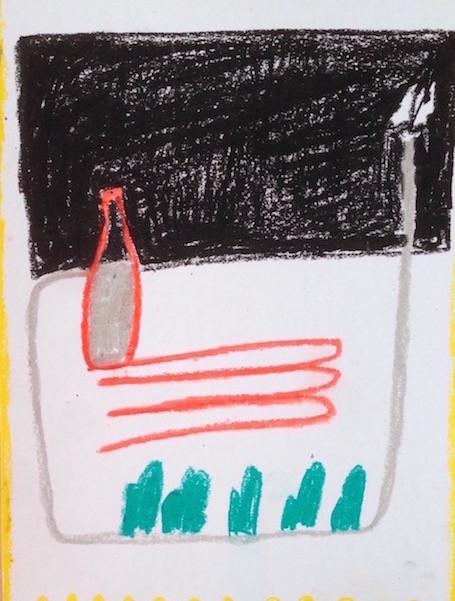 A couple years ago I tried to kill myself.

It was when I was in the throes of it with her.

I can tell you her name.

Anyway, I woke up in a hospital bed.

A murky face high above me, a face like the sun.

I was in a hospital gown.

There was a plastic yellow wristband around my right wrist.

I coughed and I blinked.

It’s illegal to kill yourself.

But I failed at the crime.

I was alive and awake, coughing and blinking.

What happened started to come back to me.

What happened was I was alone at our apartment, unemployed, on the couch, and I called her.

She was at work.

I told her I was going to kill myself.

Resolute, I hung up the phone.

Then I chased a bottle of sleeping pills with blue Gatorade.

Woke up in the hospital bed.

I guess I called her mom before I passed out on the couch, then she rushed to our apartment and called an ambulance.

But I didn’t remember that part.

And then her mom entered the hospital room.

And her mom looked sad.

She looked at me and my hair was all messy and I looked like I had almost died.

And I did almost die.

But I didn’t die.

But I’m going blind in my left eye.

And in my right eye, too.

And yesterday, I discovered that she lives in my building.

I saw her enter with some groceries.

I kind of saw her.

The image was blurry.

It was hard to make out all the shapes.

I’m still in love with her.

She studied architecture in college, but I never understood what it was, aside from the fact that it has something to do with buildings.

I just wish she would’ve told me that she’d be moving into mine.

But then again I never gave her my new address when I moved out of our apartment.

When she asked me to move out of her apartment.

Anyhow, I did my laundry today.

The laundromat smelled like cat food and cat piss.

I sat next to the machines and listened to the sound of their language.

I read a book.

I put the book down on my lap.

I was thinking about her again.

I stepped outside and called my friend.

“Dale, I’m thinking about her again.”

I told Dale that whenever I see the word architecture I think of her and get sad.

I told Dale that I get sad when I see buildings, too, because buildings are made of architecture.

I told Dale that she moved into my building.

“Have you talked to her?” he asked.

I paced around, looked at the people on the sidewalk and the ones crossing the street.

Some of them looked nice.

I hung up the phone.

I went back inside the laundromat to check on my clothes.

I waited for my clothes.

Stood there, nose inches away from the dryer door, watching them tumble.

Joseph Grantham lets his friends call him Joey. He runs Disorder Press with his sister. He lives somewhere in America. Twitter: @misterjgrantham @disorderpress