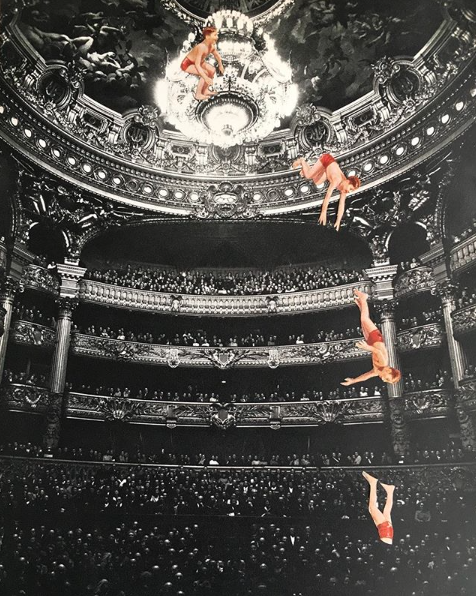 A Story Mom Told Me

In 1938, Mom brought a circus person home for dinner. They met on a corner by a bus stop. Mom was walking home, which was a few blocks ahead. She knew the person must be from the circus because of his brightly-colored costume. She had heard about the circus, and had read the posters all about it. They were hanging from all the strange new telephone poles.

The person was dressed in a dark pink and bright blue satin outfit. His face was painted faintly as if the make-up had been partly removed after hours. Whomever he was, or whomever he was trying to be, this individual had a magic sparkle around him. Mom figured the person must be hungry, so she invited him for dinner. The wizard clown, much obliged, marched right along with his new ten-year-old friend.

She nearly fell off Snake Hill. She hung there holding on to a stubborn little tree. I lifted her up by her hands then her arms. I pulled her to safety and we laughed. Silly children. We laughed as if it was nothing. Which it was then.

Dad Went to the Barnyard

Dad came home from driving an 18-wheeler all day and went to the barn to milk the cow and do the chores.
He was late getting back to the house from the barn.
His daughter worried about him, so she went to the barnyard to check on him.
He had gotten his thumb stuck in the rolling runner of the barn door way up high. He hung there in an odd position.
He told the daughter what to do to free him, which she did.
Dad went into the house and wrapped an ice-pack around his thumb.
The chores were done. Thank goodness, because he had to drive the 18-wheeler again the next day.