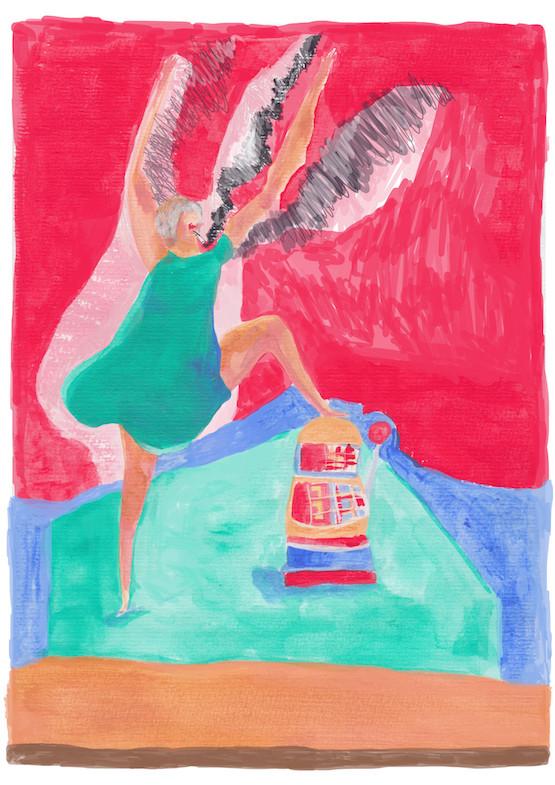 It goes like this: we couldn’t call her Grandma. It was Hazo. And she was dying.

On her deathbed, in the hospital, she lay with her children by her side. There was mum and auntie Jo and uncle Steve and uncle Tim. There was Minnie too. Minnie was her dog, this Maltese Poodle cross that, in its later years, developed a smoker’s cough, and whose fur was no longer white but stained nicotine yellow.

Mum tells it like this: they flew in from different parts of Australia—Perth, Brisbane, Gosford. And they were smiling but they were sad. They knew she was dying. So they went in with flowers and tried not to cry. But Hazo told them to stop being miserable. Good God, she said, and dismissed them with her hand. She told them everything had been taken care of and that there was no need for a funeral. She was donating her body to science. That was that. Her body would be returned 10 years later and they could scatter her ashes over the plants in the botanical gardens. She asked to see Minnie, so Jo tried passing Minnie to Hazo but Minnie began to squirm. She twisted and she shook and then she jumped from Jo’s arms and ran out the door. But Hazo just smiled. She began nodding. She said, Minnie knows. Minnie knows. And the way she repeated it, I don’t know, made it true.

But if you really knew her, you called her Haze. Why? Maybe this: She started smoking when she was 12. She smoked and she smoked and she quit when she was dead. One summer when her son Tim was 14 he started smoking too. Horrible things, Haze said. Nasty. They’ll kill you. But Tim kept right on smoking. Smoke. Smoke. One day Haze said, I’ll give you $500 a month if you quit. So Tim quit and he was rich but Haze was losing too much money. Tim told Haze she could stop the payments if she quit too. So she did. One day passed. Two days. On the third day Tim came home from school and there was Haze, lighting up. Puff. Puff. Hey mum, Tim said. But Haze just told him she didn’t want to hear it. Life’s boring, she said. What’s the point? There’s nothing else to do.

But Haze was more than her cigarettes. She loved gambling too. In the evenings she’d ask her kids who was feeling lucky. You feeling lucky, Vick? How bout you, Tim? Steve? Jo? Course those were the days when kids were still allowed in the RSLs to help their mothers play the pokies while they learned about the world. And so they went. They played the machines, Haze supervising, five at a time. You sure you’re feeling lucky, Vick? Nope? Then you can take yourself home. She showed them how to rub the machines, how to feed them. Come on, she’d say. You gotta know them. You gotta believe. Then their faces would light up because Haze was the one who made the machine’s sing.

One summer Haze took them to Bundanoon. They stayed at this campground. There was a fancy dress party and there were prizes for the most creatively dressed kid. Everyone was five and Tim was 12. He was small, sort of sensitive about it, and just wanted to fit in. All the other kids were dressed as princes and princesses and werewolves and rugby players. But Haze thought their costumes were rubbish. Not creative at all, she said. So she went out and found a branch. Hold it, she said. Look, you’re a bonsai.

Mum tells me these stories, now, as we walk through Mount Coo-tha. We laugh, together, and talk about the dead. She tells me Haze never swore. She rarely drank. She was a tough woman. A strong women. She tells me when Haze turned 50 she had all her teeth removed and replaced with a set of dentures.

But then she tells me something else. She tells me there wasn’t a lot of warmth. I just want to make sure you’re okay, she says. And I smile and tell her I’m fine. That I’m getting better. I’m crying less and the migraines are gone, mostly. I tell her I no longer want to die.

Then it’s sundown and we’re beneath the large eucalypts on a fire trail trying to find the path, those small offshoots, that will take us back towards the car. I tell her my favourite memory of Haze, the one that stands out, is this: Haze is 60-something, ten years younger, and hooked up to her ventilator, though she calls it: The Machine. She’s just installed Foxtel to watch boxing on the television, and she’s watching it. It’s Christmas Eve and we’re sitting around the Christmas tree, guessing at presents. I bet it’s a book, my cousin says. Maybe it’s a Nintendo. I hope it’s a Nintendo. Books can get stuffed. I tell her this advertisement came on for patches or Nicorette gum, something for quitting cigarettes, and Haze said, Good God. Then she turned to us under the Christmas tree and told us how stupid it all was. How Ridiculous. Blow em’, she said, and then she got up, unplugged herself from The Machine and walked towards the door. She had a different dog then, I forget it’s name, but she picked it up and went outside. She smoked. One cigarette. Two cigarettes. Three cigarettes. She smoked and I remember the way she smiled. She smoked like she’d won. And then, I tell Mum, something happened. I saw something. I tell her the smoke above her head had formed a ring – neatly, perfectly – and I thought she was an angel. I thought she was an angel who smoked and watched boxing and that she’d teach me how to be strong. I came from her blood and I thought that meant something. I thought she’d watch over me.

Oliver Mol is the author of Lion Attack!