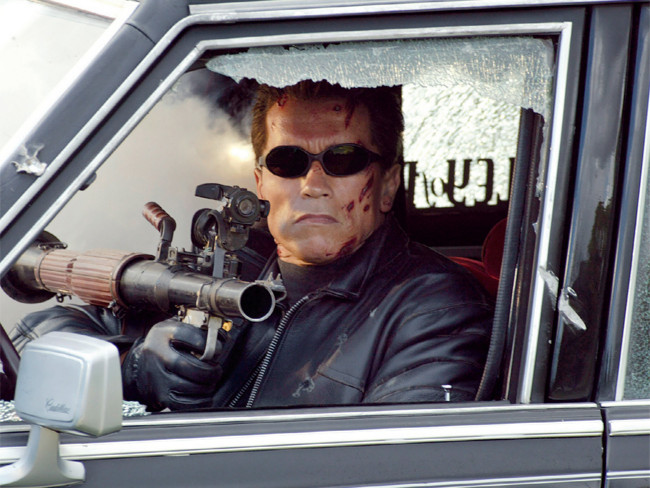 I was doing a lot better with my road rage. One day Chris and I were coming back from the store and I hadn’t even called anyone “Fucker” or “Look at that stupid motherfucker” or “Fucking move it buddy.”  I wasn’t flipping anybody off or shaking my fist or talking about how the whole earth needed a new extinction.  “Who cares about saving the earth.  I thought the purpose of life was to destroy it.” I wasn’t making sweeping generalizations about entire groups of people or shouting insane shit.  Of course, Chris usually never let me drive when we went someplace, but he seemed to notice how calm I was today.  I told him about the last time I went off in the Kroger parking lot.  This woman tried to sneak in front of my car in line and I wouldn’t let her.  She screamed and told me to fuck off.  I was driving Julia’s car with the California plates on the front.  The woman leaned out her window and shouted, “You little California faggot.”  Chris laughed and then I said, “Yeah and what was worse was I was wearing a camo t-shirt. I bet it’s the first time someone wearing a camo t-shirt was called a little California faggot.”

We kept driving and I said, “Goddamn rednecks.”  Chris looked out the window and we drove along.  Sometimes it seemed as if things ran smoothly and the world was in order.  Other times it seemed the world was out of balance and everything would annoy me.  This could be caused by leaving too late or not being able to find your keys and these small disturbances would set off a series of events that led to blind rage.  I felt like things were good today though.  Someone put on their turn signal late and I didn’t even honk the horn.  I just hit the brakes and kept quiet.  Then we stopped at a red light and we waited and waited.  When the light turned green I didn’t immediately shout, “Shit buddy, move.”  I waited until the guy in the car finally looked up at the light and went go.  I drove on and then this big blue van pulled out from a gas station and whipped right in front of us.  “Shit,” I said, but I didn’t shout.

I told Chris about how a year before these guys pulled a gun on me. They were in a big truck covered in Friends of Coal stickers and they were riding on my ass.  They kept revving and riding up on my tail and I decided to fix them by slowing down to nothing.  I slowed to 35 and then 30 and then 25 and 20.  Then we slowed to a slug crawl at 10 mph.  I looked in the rear view mirror and I saw them shaking their fists at me and then swerving left and right in my side mirrors trying to get around me.  I held up my middle finger and then I watched the rednecks go insane.  Soon the two lane turned into a four lane and then the rednecks rode next to my car and then one of them flashed a gun.  They shouted, “Fuck you. I’ll fucking shoot you.”  They were serious.

I said,  “Yeah I know.  I never told you about that?”  Chris laughed nervous at the story now.  Then the blue van in front of us turned where I was going to turn.  Fucking van.  The blue van kept slowing and I told Chris, “It’s our luck we get behind a fucking van going exactly where we’re going.”  I turned on my signal to turn down a narrow side street, but then the van did too.  The brake lights kept blinking.  And I watched my foot tap tapping at the pedal.  “Fuck,” I said and I felt the anger filling me up like food.   We followed the van down the narrow side street with piles of snow on both sides.  Then the brake lights lit red and then the blue van stopped.  Completely.  Fucking.  Stopped.  There were trash cans in the small space where I could have possibly slipped by and piles of snow too.  We were stuck. I whispered my positive affirmations.  “Calm down.  Everything is fine.”  But each time I did the anger food filled me more.  I honked my horn honk and then I honked it again and felt the horn push back against my palm.  I said, “What the fuck are you doing?”  Then the van door swung open and a big woman in sweatpants got out.  She waved at me like hello and then she waved at me again.  Then she started walking up the sidewalk to a tiny house.  I rolled my window down and shouted, “Why are you sitting in the middle of the road?”  I told Chris, “What if one of us had to get home to shit?” I was serious.

The woman kept waving her hands like,”Okay. Just a minute. I’m sorry.”  But then she opened the door to the house and waved one more time and disappeared inside.  I rolled up the window and told Chris, “What the fuck is she doing?”  Chris asked me if we should back up.  I looked into the rearview mirror but a truck pulled behind us.  Chris said, “I guess we’re just going to have to sit here.”  I said, “Fuck it” and put the car into park.  I started ranting to Chris about how mini vans should be outlawed.  They were the vehicle of serial killers.  “She probably has dead bodies in the back of it right now,” I said.  “If you outlawed mini vans you wouldn’t have any serial killers.”

Chris told me it was okay and not to worry and then I watched the guy in the truck behind us waiting patiently.  I thought about ranting some more, but then I thought about what my dad always told me when I was in a hurry:  “If you were in such a hurry you should have left sooner.”  Chris looked at me and told me I was okay and she’d move soon.  “We can just wait,” he said.  I honked the horn again and the snow began to spit down.  I kept repeating, “What the fuck is she even doing in there?  Who leaves their fucking vehicle out in the middle of the road?”

The snowy sleet was falling harder now and tap tapping against the windshield.  “Where in the fuck is she?”  Then I sat on the horn until it played a super loud horn honk song.  The front door of the tiny house opened and the big woman walked out and held the front door open.  I honked my horn song some more and then I rolled down my window again and shouted:  “Move your shit.”  But she didn’t move.  She just looked at me like “Sorry” and, “I hear you, I hear you.”

I rolled the window up again and said, “What the fuck is she doing?” Then I saw the reason.  There was snow and there was a road and there were silver looking garbage cans covered full of dents. There was Chris and there was me and now there was someone else.  It was a little old woman standing behind a walker in the doorway.  She looked like she was a hundred years old and her face hung low and sunken and her skeleton eyes peaked like black holes inside her skull.  She had all these scarves wrapped around her head and a giant coat on.  She slowly tip toed out and emerged from the door like a baby bird being born.  She kept walking in little steps so slow past the woman in sweatpants who pulled a wheelchair behind her.  Then the big woman shut the old woman’s door and locked it.  The old woman stopped and waited until the big woman unfolded her wheelchair and then the old woman sat down slow and shaking and scared.  Chris said, “Aww see.  It was no reason to get upset.  It was just someone stopping to help an old woman get to her doctor’s appointment.”

So I sat and watched and I saw how beautiful it was.  I laughed and then I saw that this was the story of the world.  Everyone was waiting and in a hurry to get somewhere. I shook my head and I finally smiled.  I said what we should all say. I said,  “I’m so fucking stupid.”  I was quiet and patient now like the guy in the truck behind us. I watched the big woman rolling the old woman through the snow and then to where the van was waiting in front of us.  The old woman took the walker she held and stood up in front of her wheelchair. Then the big woman folded up the chair and put in the van.  The old woman stood with her walker at the side of the van and she kept looking my way and pointing at my car like she was saying, “Is that him?  Is that the asshole honking his horn?”  The big woman shook her head yes. Chris smiled and waved sorry.

Then the old woman looked at me and raised her arm and flipped me off with a super big, middle finger FUCK YOU.  I thought about waving or saying I was sorry but instead I just smiled and flipped her off too because I knew what she was saying. We were all alive now. We were saying hello.