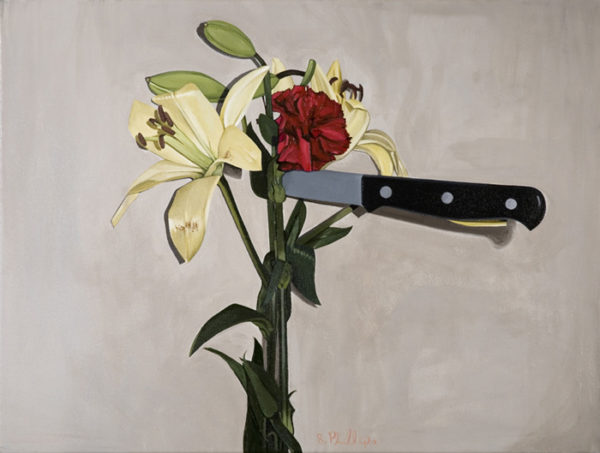 The preacher pulls back on his hangnail in the dark, cuts. A mosquito sucks from a slender vein in his old saggy neck. He lifts a dry hand to the dark air, rethinks, and settles it back against his pant leg, smooths away at wrinkles there.
A barbeque smell to the air: fires and canned beans. The preacher comes out from the tent, sits on a chair in front of a small fire. There is a dented bucket beside him calloused over with rust. He retrieves a handful of mulberries from it, pops them in his mouth, chews them slowly. His hands and mouth look bruised, turning more deeply red, almost black, with each swallow. He washes his hands with a bottle of water, dries them on his pants then claps them together.
A mother brings her child to the preacher’s tent because the preacher is the only one there with a blade. The boy is shallow-breathed and dry about the lips. His tongue, folded, sticks to the backs of his teeth. The preacher sets the kid down on a little stool in front of him. He blesses him, then begins slashing at the boy’s hair.
The preacher tugs some strands and indiscriminately strokes the razor through. A shock of hair the size of a cigarette box falls to the ground. It covers an anthill. The boy looks down. The ants have begun gathering bits and pieces of the boy’s hair and taking off with them.
The child watches the ants. He knows he should talk with the preacher instead of just sitting, but he has lost his words.
There. Now that the hair’s gone, says the preacher, let’s get you all the way cleaned up.
The child looks pleadingly at his mother, hoping she sees. She smiles and nods and lets the preacher proceed. As the preacher begins carving into his scalp, the child prays and watches the ants drown in his urine.