From the Discarded Collection 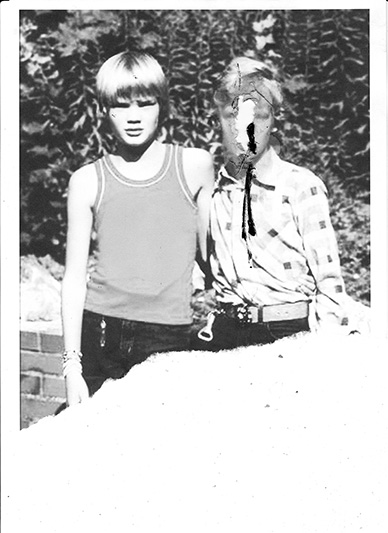 A series of photographs are tacked to the walls of this abandoned apartment in the heart of the projects. It looks recently vacated, empty except for a blood-stained pillow. The floor is marked by a fresh ring of soot from a campfire but where you might expect to find discarded cans of food, there’s only a small pile of stones. Someone’s parted the dark curtains which reveal a view of the nearby polluted river. The pale sunlight drifts inside to frame these pictures of K.M. Hours must have been spent sifting through magazines to select the images for this makeshift portrait gallery. The shots are ragged, repaired with clear tape, affixed to the plaster with wads of chewed gum. Spearmint, mostly. But they’ve been curated as carefully as a gallery exhibit, and tell a story, of sorts.

Photograph #1: The back cover of K.M.’s second album. He lies on his back in a sun-dappled meadow, crimson flowers peeking through the grass, encircled by sitting bandmates eating strawberries. He looks so thoroughly the underground rock star—gangly with pocked face, untamed blonde curls, red wool scarf wrapped round long neck. You’d never believe that neck could house such an unearthly voice. He squints warily at the camera, as if blinking into a solar eclipse. This pastoral idyll is almost certainly staged. But still, these are the good times. So smile, K.M. Smile wide.

Photograph #2: K.M. kneels on stage, coddling a mandolin in the crook of his arms like a sleeping infant. It’s a pose only he could make look natural. Sweat crowns his forehead. His eyes sway back into their sockets. A beatific expression strangles the rest of his features. Nobody else is in the frame. There’s something unnerving about the way he’s so absorbed in the moment, as if he’s crossed some threshold, simultaneously possessed and vacated. Maybe that’s because the photo dates from his band’s last sold-out club tour, renowned for its unhinged performances. Maybe it’s too tempting to map the future onto each moment of the past. And maybe this is only an isolated instant of ecstasy, a fleeting sensation snatched mid-song, not a portent of imminent collapse.

Photograph #3: A grainy black-and-white shot of a man on the curb of a city sidewalk. He’s seated on his hands and stares listlessly at the gutter. It’s hard to discern any features, but that shock of curly hair looks familiar. The rickety card table next to him holds exotic maracas, a blue thumb piano, half a xylophone, and various guitar pedals. Plus a mandolin whose strings have been torn off. The scene is downtown Champagne, where K.M. dissolved his band and aborted the tour. He renounced his music and sold his instruments to unsuspecting passersby at nominal prices, everything gone within a few hours. The photo is snapped by a pensioner who believes he’s witnessing a quaintly surreal city scene that might interest his grandchildren. Nobody understands what is really happening.

Photograph #4: A duplex apartment on the outskirts of an unremarkable college town. On the second floor, surrounded by pots of blackened ferns, K.M. stands on the balcony and gazes into the dusky light. The shot is fuzzy but there’s an unmistakably bereft look in his hollow eyes. He’s wrapped himself in a gray flannel bathrobe with fraying sleeves. Two weeks have passed since the Champagne abdication. Rumors already run rampant. Some claim he quit because of the suicide of his first lover. Others say he was overwhelmed by the adulation of fans who camped for weeks in the woods outside his apartment, mailed him fresh clippings of pubic hair, carved his initials in each other’s forearms. A handful of faithless souls suspect he lost his ability to write songs. A redheaded girl in Central Ohio thinks he simply got bored. This blurry photo is the last confirmed shot of K.M. Several days later he moves from the duplex and vanishes into the margins of his own story.

Photograph #5: Pedestrians in Quito mass on the street corner waiting to cross. You can easily spot the two gringos in the crowd. They wear puffy ski jackets against the city’s bitter and grit-filled winds. The old gringo with the braided white beard flashes the peace sign at the camera. The young gringo stands stooped and indifferent, features shrouded in wool hat and reflective sunglasses. That’s K.M. Or so the photographer claims. He says K.M. was there to experience the microtonal vocalizations of an indigenous tribe who now work in an auto factory and sing only on their lunch break. Add this tale to the others that have proliferated over the years. K.M. seen busking for spare change at midnight in the Glasgow train station, playing Broadway show tunes but singing the lyrics in Esperanto. K.M. residing in a Jainist monastery along the rocky border of Spain and France, fasting for weeks at a time, wandering the grazing fields in a daze, sucking on stones. Out of sight, these stories breed and multiply.

Photograph #6: K.M. slumped asleep in the front seat of a van. Eyelids shut, head lolled forward, spittle collecting around his lips. His body is limp, lost in the riptide of a dream. He looks profoundly helpless. The photo predates Champagne, but let it stand for some of the darker rumors that now swirl around him. K.M. repeatedly hospitalized for schizophrenic breakdowns, receiving so many electro-shock treatments that he bites off his tongue. K.M. swallowing an entire bottle of cat tranquilizers in Mexico and his cadaver dumped in a mass grave. K.M. sequestered in an empty apartment in the projects near a polluted river, never leaving the blacked-out room, humming tunes to himself that he forgets moments later. That last story is one I started, but it might still be true.

Photograph #7: The image has been ripped from the wall. Only the upper left corner remains, a black triangle of paper dangling from the gum. There’s no clue as to this photograph’s possible content. It could’ve been removed in disgust for the reckless rumors and false sightings it represented. Or maybe in disgust for having ever believed them. Or maybe even in disgust with the tortured musician himself. A gesture that K.M. would surely understand. The scrap of black shines in the waning light. The rest of the wall is blank.