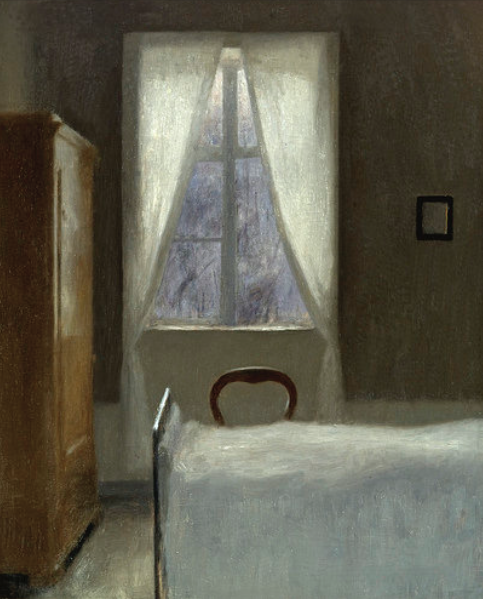 There was a nurse in the room. A Dixie cup with her piss on the counter. Such a small cup, a quantity for infants, the waxed paper. She could remember being young in a church basement with such a quantity of juice. Drinking it, being glad for it. This small cup.
The scrapings required different instruments, a different instrument for each scrape. One looked like a brush, she saw it in the trash after while pulling her legs through her pants – thistles in a round shape like for a pipe or for dishes in a machine but full of blood, her blood and what was scraped at there in the trash. Another felt smooth, like the knife a professional would use to square off a cake’s icing. The persistent sting of vinegar, a sting and a retract. A pull and pinching, then one great snap as the pinchers clenched.
The old doctor with his hand inside her, putting his weight to it like she was fish, like he was gutting.

Months before she had been at a funeral home. Her grandfather had died the day before she was supposed to arrive for Christmas. Her grandfather had made her a dollhouse when she was young. A dollhouse and furniture made of balsam that he had stained. Chairs with red velvet strained to the seats. She sat with her parents at their dining room table sifting through church programs, making calls.
Then they were in an office, a whole building full of carpet. She sat and listened to a young undertaker, his leather folder open to what her grandfather had arranged a decade before. She thought maybe she could be his now, this undertaker’s. He had this folder. He knew the rules.
This was a problem, red and apparent as the affixed bows on the tree in the corner. The ribbon old, wire-edged, flocked velvet, stiff and faded in its creases. The bows an inheritance, choking the tree limbs. Snarls of tinsel disseminated by an infatuated cat, persistent as a claw.

And then later she was in a room with two hundred strangers, instructed to stand up and recite the pledge of allegiance. Beige décor and the ordinary people. Large hallways and large rooms in a sand color, something clean and stone and polished and empty. She’d waited in line, gone through a metal detector, waited more, filled out forms.
The forms asked about prior convictions, if she’d known criminals or the victims of crimes. She knew lots of criminals and victims; most of the people she knew. She filled the boxes with checks, all the boxes got checks; whose wouldn’t?
She put her right hand over her heart. Our father, she wanted to say, but that was not right. There was a scuffle up front and then she watched as a man was taken out of the room. She stayed standing with her hand over her heart, trying to see through the thick of the bodies.
Her number was called and she was lined up in a hallway, waiting in a line for entrance to another room. There were officers in uniform with guns and there were coordinators with clipboards counting.
She recalled that a nurse had been there with them for her biopsy, who stood by but not too close. Was the nurse there in case the pain got to be too much? To restrain her?
She stood in this stone color, polished. She stared as though she were making a decision.
This is when they will shoot us, she thinks.