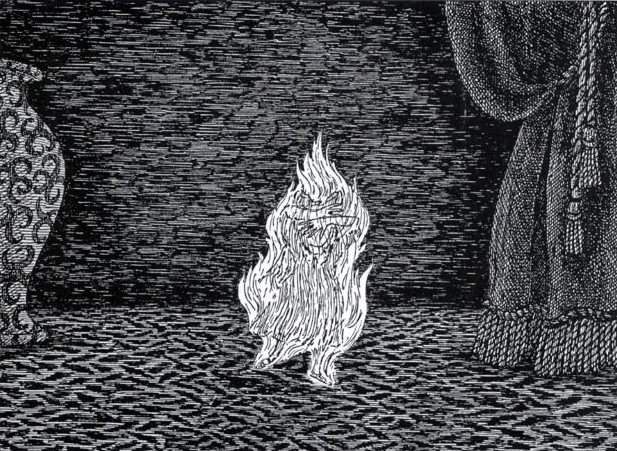 They beat my mother apart behind the bushes. I was hiding. The house beneath us both in gold. In spirals of sick smoke above begging forgiveness of narration, if not from me then from my mother, who was dying, or who already had and was simply being beat apart, as I have said. I believe there were several of them, someone’s brothers, dressed as medics, though they moved like an amalgamation born from wire. Too thick to lift, too gone to name. That’s how people were these days most often, though not my mother. I heard her cooing even as they tickled off her flesh. I’d become aware they’d took her clothes off while I was hiding. I had been hiding for as long as I could remember doing anything. The men had knives. Long blades that glinted like computers would when there was power in this town. It had been impossible to see much of anything out here besides the scrambling and where the blades went when they shucked them soft into my mother, in her forehead, then her noseholes, then her eyes. Like one of the men was holding her head up so the other could jab at it until there wasn’t anything to jab left but ribbons. All of them laughing, grabbing their dicks. I don’t know what my mother ever did. She always held my hand when we would cross streets and she would remind me where the relief was when I came down with my headaches and she would tuck me into my own bed and say some words she knew by heart, words I knew she meant to make me feel safe, though even off as I have always been, nearly already a man myself, I could tell already she wasn’t sure if she believed the words were real. It didn’t stop her from getting out of bed, from showing me how to hide behind my hands when strangers came to do the things that they would do to anything that moved because they liked to hear another squeal. I knew at least not to squeal, but instead to hold my breath and wait for help, someone I’d seen before, someone who already knew my face. Though all of the people I knew in that way were by now already all long gone. They always had been, and would never be again. I mean it must have worked, this plan she taught me about hiding, because indeed like anyone I’d ever known I could have been I went unseen. I hunched and held there in dim daylight, on our front steps crouched to fit with both hands fit hard onto my face like some bad mask, through the slits in which I watched with pissy pants and winding air and hardly seeing as the amalgamation took what they wanted from my mother and held her body down and screamed their joy, hardly any different then forever after as they’d finished and they rose by and slithered past, onto the next home, maybe, for better bodies, if someone else in there was hiding in less a good way as my own mother had taught to me, or maybe they were going back to their own home instead for time to rest, to have their own mothers feed them something nice and fill their stomachs, tell them to be good children more often, and do her best to teach them how.

____
ARTWORK BY EDWARD GOREY, R is for Rhonda consumed by fire