Yes, This is Esther 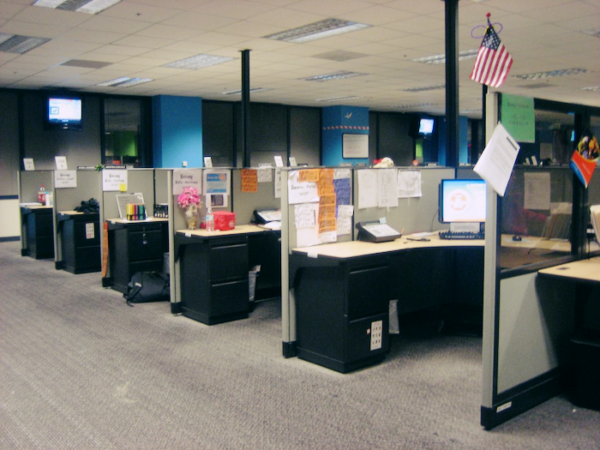 Esther ends a call and shuts her eyes, tries to roll them back into her head, all the way back, if she could side-eye her own brain she would. She just spoke to one of her regular accounts, some deadbeat who could only pay in fifteen dollar increments, not that it matters to her. She places her headset in its cradle and shuts her eyes again and puts two fingers on either temple. Each hand resembles the mock pistol that people mock kill themselves with sometimes, hammer thumb and barrel fingers, and right now, frankly always, she feels like mock killing herself, mock ending it all right there at work in front of everyone, slumping lifeless in the chair, having mock blown her brains out, her coworkers mock freaking out, the utter mock trauma of having witnessed a mock suicide in the workplace, some of them mock taking time off and receiving mock treatment from mock trauma counselors, which she doesn’t know if the company’s insurance plan would mock pay for, and Esther visualizes playing dead until her immediate supervisor comes around and says What’s up. Esther thinks about this scenario several times a day, how funny it would be to her, a private joke that would alienate everyone she works with—that’s the funny part—playing dead in an office. Esther says, Nothing, tough call, and her immediate supervisor makes a duck face, evidently one of contemplation, and says, One of the guys in sales palmed my ass, but the way her immediate supervisor says sales sounds like Sal’s, like it’s a club, or a pizzeria down the street, so Esther is momentarily confused until she remembers her immediate supervisor’s verbal quirk, and she says, That’s horrible, you should report him to H.R., and her immediate supervisor laughs at Esther and says, No way, he’s hot as fuck, and makes the same duck face, this time meant to be seductive, and Esther wonders about the omnipresent fuck simile, how everything now is compared to fuck, how fuck is the new hell, and she wonders when I die will I go to heaven or fuck, if I kill myself at work will all fuck break loose, my life is a living fuck, my immediate supervisor is fuck on wheels, my coworkers will be here until fuck freezes over, my job makes me feel like I’ve been to fuck and back, and Esther’s immediate supervisor says, Hello, are you spacing out, and Esther says, Fuck, massaging her temples with the muzzles of the mock pistols, and her immediate supervisor says, I know right, and walks away, as Esther mock unloads some mock hot lead right into the back of her immediate supervisor’s head.

Esther pulls and snaps on a pair of nitrile gloves one at a time, snapping a little too hard because she likes the sound and the sting of synthetic rubber on her wrists, a minute pain that serves to keep her alert, a quick slap reminding her of the task at hand, which is now and always to avoid making contact with her bare skin on anything in the bus she’s about to board. It brakes to a full stop and kneels. THIS BUS KNEELS is actually a sign posted at the front of the bus to the right of the farebox, and Esther smiles as she always does at this particular phrasing, THIS BUS KNEELS. She thinks it’s quite possible that THIS BUS is the only thing in her entire life that’s ever knelt before her, not an enemy or a penitent or a submissive lover but THIS BUS, and it empowers Esther in the way routines do their adherents, although, and this also crosses her mind each time she boards THIS BUS, KNEELS seems a little poetic for what it signifies, the mere exhaustion of air pressure, so maybe what THIS BUS does is SIGHS or SQUATS or FARTS AND FALLS, and she decides that THIS BUS SQUATS is what the sign should say. SQUATS suits the overall temperament of the bus riding experience, she thinks, the waiting in a cracked out shelter, the behavior of the passengers, the grim interior of the vehicle itself, the sensory overload of gasoline and corn syrup and bargain fragrance. Esther boards and inserts her swipe card into the farebox and the farebox beeps and ejects her swipe card and she smiles at the driver staring into space and she begins to look for something to hold onto, a sweaty handrail or a warm piece of stanchion, which is why she has the nitrile gloves on. The crowd is rigid but she sees a free couple inches of handrail in the back and zeroes in, stares at the rail as she begins her solemn approach towards it, blind and numb to everything but the noonlight gleam of the rail, blind to the ads and pastel hashtags and the idiocy of qr codes, numb to the rumbling floor and the rustling jackets and the men casually elbowing her breasts, it’s just the rail she wants, she’s just a few steps away now, the wonderful lifesaving functionality of a few inches of rail is what Esther accepts into her heart, and she’s just about to lay a hand on the rail when a hairy fist grabs it, a fist in the crowd rips the inches of rail from her as THIS BUS jolts and lurches and to Esther this feels like the holiness she accepted into her heart has been rejected, incompatible, spat out irredeemable, there is no longer a single thing to grab onto, and as she begins to fall she decides to do what people do when their faith wavers, she gets on her knees, now she’s the one kneeling on THIS BUS, and supports herself by placing two fingers of each gloved hand on the rumbling floor, and nobody cares, and amidst all the grime and crotch-height sebaceous fragrance, she looks down and sees that each gloved hand resembles the mock pistol that people mock kill themselves with sometimes, barrels pointing down now, and nobody notices the quiet woman kneeling, staring straight ahead, making the soft plosive sounds of pistols discharging.