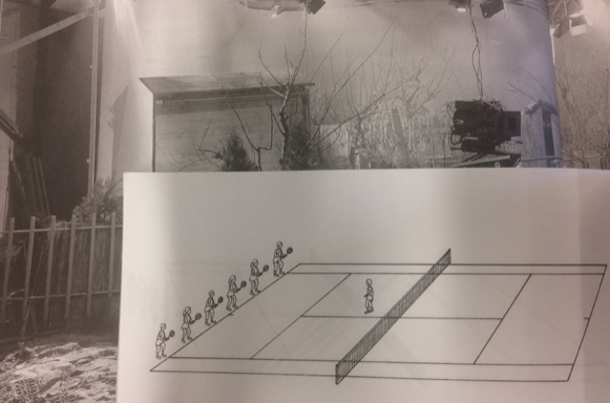 The new Fellows are sitting in a sports bar after orientation, drinking.
They are talking about things that interest them: books, words and what they mean, but also things like good sandwich shops in the area, and how someone, a boy from the Buddhist Monastery, had broken into the YMCA to smoke opium in the lifeguard chair.
On the walls behind them are many television screens playing basketball, golf, river football, and soccer. The Fellows compliment each other, how they all seem intelligent and qualified.
Fellow 1 shows someone a picture of her cat, Beckett, sleeping on The New Selected Poems of Ezra Pound.
“Wow,” says Fellow 2, who goes on to talk about Ezra Pound and all that she has done for the world of modernist poetry.
A waitress in a tiny apron brings them all whiskey shots.
Fellow 1 is confused. Why did Fellow 2 refer to Ezra Pound as a woman, if Ezra Pound was a man? Fellow 1 begins to think that maybe she did know Ezra Pound was a woman, but had for some reason forgotten. She tries to remember what Ezra Pound looked like, and imagines her looking similarly to George Eliot, who she had also, at one point, thought was a man.
Fellow 1 starts feeling profoundly embarrassed, thinking of all the times she had referred to Ezra Pound as a man, and vows to never make the mistake again.

It is a slow afternoon at the sports bar, and some of the Fellows go out to smoke cigarettes, where they remark on the view from atop the hill, and laugh a big, booming laugh. They leave behind Fellow 1 and Fellow 6, a confident boy from Nebraska who has taken an interest in a tennis match on one of the many television screens.
Fellow 1 strikes up a conversation with him about how Ezra Pound was rumored to have translated a book of love poems from ancient Egyptian hieroglyphs, but it turned out she had made it all up herself.
Fellow 6 nods, taking a long sip from his drink. “I’ve read that,” he says, then pauses. “Ezra Pound also made vibrators by putting bumblebees in glass jars,” he says, “and after orgasming would throw them at pedestrians from her seventh-floor apartment in Paris.” He turns his attention back to the tennis match.
The ball bounces back and forth on the grass court. The players move closer to the net and volley. They sound like little angry creatures, weirdly struggling, until the louder and more attractive player hits the ball into a corner of the court.
He smiles a winning smile and throws his racket into the crowd.
The camera pans to a young boy in the stands, who catches it and keeps it under his bed for years, telling his friends that it belonged to Venus Williams herself, and that her breath smelled sweet, like a pear, when they kissed.
Fellow 1 looks into her drink. “Yes, I remember reading that too,” she says.

Nicolette Polek’s work has been published in The Chicago Quarterly Review, Shabby Doll House, Hobart, and elsewhere. She is currently getting an MFA in fiction at University of Maryland.