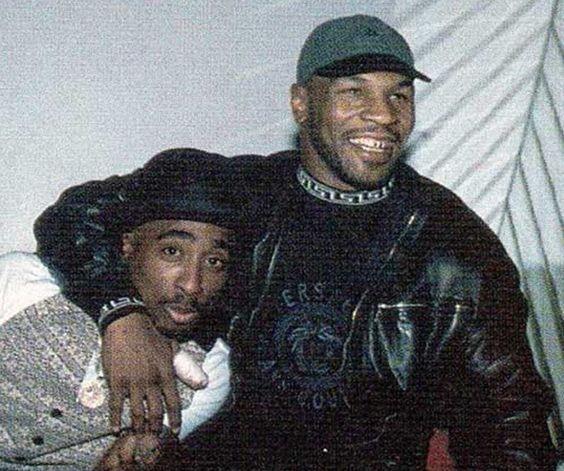 September 7th, 1996: Bruce Seldon vs. Mike Tyson at the MGM, the arena is full. Thousands of faces, each waiting to watch Mike Tyson destroy another man.
(The author of this story was 15 years old in 1996. The author looks at Tupac’s wikipedia page. Tupac was born on June 16th, Blooms Day if you are a lit nerd. The author remembers that his brother killed himself on June 16th. Tupac was born, and named after a Peruvian revolutionary. Even though this story is about Tupac’s death, we must remember: he was born. He came from a woman, he had a childhood…)
Tupac sits among the thousands of people at the Seldon vs. Tyson fight. Tupac feels calm. He loves Tyson, and he wants to watch a man get destroyed. He wants to experience victory. Suge Knight is sitting next to him – his best friend, his boss, the owner of Death Row Records. As Tupac looks around, he thinks that he has never felt like one of them. He has always felt, deep in his chest, that his life was an emergency, that he could never quit for even one second. Everyone around him lived in mimicry, and this mimicry killed him. He didn’t want to pantomime his life. He didn’t know if it was it because he knew he would die, or because of his fatalism that he felt this.

Mike Tyson entered the ring. Tupac slapped Suge’s knee, Suge smiled at him. Seldon entered the ring. Tupac yelled, “Seldon looks scared.” Suge saw the fear in Seldon’s eyes. Suge knew fear, he knew exactly what fear smelled like. He could see Tyson was focused, that Tyson had a hold over himself, he was in control.
Tupac liked the idea of the fight, the idea of the world seeing how hard these two black men worked, that their bodies were beautiful, that no one alive could stand in a ring with these men. When Tupac looked at Mike Tyson, he saw himself – another man, trying to innovate, change the world. Another man that had come from sadness.

Tupac knew and felt why Tyson could escape into such rages. They were two black men who had risen to the national spotlight. For them, it was not just a fight to be the best in their disciplines, it was war, a massive force that wanted to smash the history of their country. America was one thing, but America was Tupac and Tyson, too. From the sailboats of Bar Harbor, Maine, to the cornfields of Iowa, the abandoned mills of Ohio and Michigan, Santa Monica Pier and the Stratosphere, the rights of Thomas Paine, Benjamin Franklin, four wheelers, ice cream trucks, taco stands – all of it was Tupac and Tyson. They were always America, they were treated like a spectra, but it was theirs.
One night, sitting on a lawn chair with Suge in a backyard after a long night of drinking, Tupac stood up and said, “This country is mine too, this is mine, it isn’t just theirs, Suge. It is ours too. All that American money is mine, all that American Dream is mine too. It is mine. I don’t need to ‘take it’ and I don’t need to ‘steal it’ and I don’t need to ‘earn it’- it is already mine. America is already fucking mine.”
Tyson knocked Seldon down. The crowd screamed. Tupac felt full of enthusiasm and love for Tyson. Seldon stood back up, his whole body shook in fear. The fight was practically over. Seldon was not going to win against Tyson. He didn’t even want to win anymore, he just wanted it to be over. Tyson saw Seldon had gone weak, and he knew what he had to do. One good punch and it would be over. Tyson didn’t feel relieved by this new information, because Tyson, ever since he was little, had never believed in himself. He never saw victory until victory was complete. Tyson kept his rage on, and terminated Seldon. Seldon fell again. Tupac hollered at Suge, “It didn’t even look like Tyson hit him.”
Tyson stepped back and thought, “Of a most stormy life.” He didn’t feel anything. He didn’t even know why he won. There was a part of Tyson that wished he would be punched to death, that someone could kill him, and end the sadness in his heart.
Then he thought, “Well, I’m alive, I won, I’m the fucking king, fuck everyone.”

Tupac and Suge left their seats and went to the back area to congratulate Tyson. Tupac felt crazy with excitement. His body surged with energy. But, like Kurt Cobain, there was too much energy, and it made the people around him uncomfortable. Tupac couldn’t help it. He demanded reality be lifted. He loved losing himself in those moments, because he knew that when the thrill wore off, when the surge receded, a darkness would come, a torrent of pain, of memories, a surplus of moments where he felt uncomfortable, unwanted, like excess.
Tyson didn’t come out quickly enough, so Tupac and Suge left the arena. Tupac couldn’t settle down, he felt amazing. He had just watched Tyson win, he was one of the top rap artists in the world, his bank account was getting fuller and fuller. But nothing had prepared him for the pressure. There was nothing in his childhood to train him to be a leader, to have a million dollar bank account, to have the responsibilities of being famous and a hero to his people. Tupac wasn’t like a normal artist, he was not propelled by self-importance. Tupac wanted to yell, “Humility hurts, feeling everyones’ pain, having empathy hurts. This is not easy. If I am your voice, I am your pain. I am not only your dreams accomplished, I am your dreams crushed.”
Tupac and Suge entered the casino area, slot and poker machines everywhere, old people from all over the world sitting, smoking cigarettes, drinking watered-down rum and cokes. Tupac liked Vegas. The lights, the sound of change falling onto metal, felt like ocean waves to him. He felt euphoric walking through the casino, then someone came over and whispered something into his ear.
An incredible surge of energy ran through Tupac’s body. Anger rose up in him, through him, he could not contain it. He ran over and attacked Orlando Anderson. A burst of violence. Orlando Anderson fell to his blows. Then Tupac just stopped, and walked through the casino to his car. (This is odd, a man fights in the middle of a casino with no fear of the police coming. This lack of fear is amazing to the author. Was it fatalism? Was Tupac bipolar? Was he trying to prove something? That he was still hard? If he had lived, he could have grown older, wiser, gotten on medication, started doing yoga. He could have told us about what led him to such extreme acts of violence, without fear of consequence…)

Tupac and Suge got into Suge’s car. Suge was driving. Tupac had already forgotten about the fight. He’d just forgot it ever happened, as if he was designed by Nietzsche himself. He was the Super Man. A fearless one that had emerged out of a scared society that could no longer stand up for itself. Aristotle said, “Such a one may truly be deemed a God among men.” And Aristotle also noted that civilizations often killed those who rose too high, who have no concern for the laws of men.
Suge and Tupac stopped at the red light at the intersection of Flamingo and Koval. To the right of them was a car full of girls, and they asked Tupac and Suge where they were going. They both yelled back, “To a club.” Suge and Tupac were really happy, they felt in the moment, they weren’t scared or lonely. They weren’t old and sick, preparing to die.
Then Tupac felt bullets enter his body. He had been shot. Suge heard the shots, a bullet went into his scalp, but he was so overwhelmed with Tupac having been shot that he wouldn’t notice until later. The shooters turned right and took off down Koval. The light turned green. Suge started racing away down the road, trying to get away from the shooters and get Tupac to the hospital. Tupac knew he was shot, but he had been shot before and lived. He was 25 years old and was convinced he would not die. Tupac looked at Suge and said laughing, “Suge you’re shot. Your head, it’s bleeding.” Suge looked at Tupac, saw blood pouring out of several holes. Suge knew this was bad. A panic erupted in him. Suge loved Tupac, they had spent many hours together. Suge was not the type of man to be vulnerable, but at night, when no one was around, Suge had been vulnerable with Tupac. Tupac was vulnerable all the time, he was emotion, he couldn’t contain it, he had to give his heart to everyone. Tupac said to Suge, “I love you man, I love you, but you shot in the head.”
The car was suddenly surrounded by police officers riding bicycles. The cops ran over, seeing that their car was covered in bullet holes. The cops yelled at Tupac and Suge to get out of the car. Suge got out. The bicycle cops screamed at Suge, pointing guns at him, to get on the ground. Suge kept yelling, “Tupac is dying, help him.” The cops kept yelling, asking them what gang they were in. The cops did not enter into the situation with the intention of helping them. Tupac in his last conscious moments on this planet, watched the bicycle cops scream and point guns at his friend. Eventually, the cops realized Suge was not a threat, and they ran over to Tupac. They opened the car door and Tupac fell out of the car, onto the cement. A cop asked Tupac, “Who shot you?”
And Tupac said his last words, “Fuck you.”
(The author doesn’t know if Tupac truly hated that cop after watching the cop pull guns on his friend, but if someone pulled a gun on your friend, would you feel respectful to that person? Maybe it is the question. A man is dying, and instead of asking “Hi, my name is Jim, Are you okay?” You ask a stupid question that could be answered later. Or maybe Tupac could never be a snitch, and the cop did not and would never understand true honor in Tupac’s opinion, and Tupac had no respect for those who lacked honor).

I myself but write one or two indicative words for the future,
I but advance a moment, only to wheel and hurry back in the darkness.