Self with Lowered Head 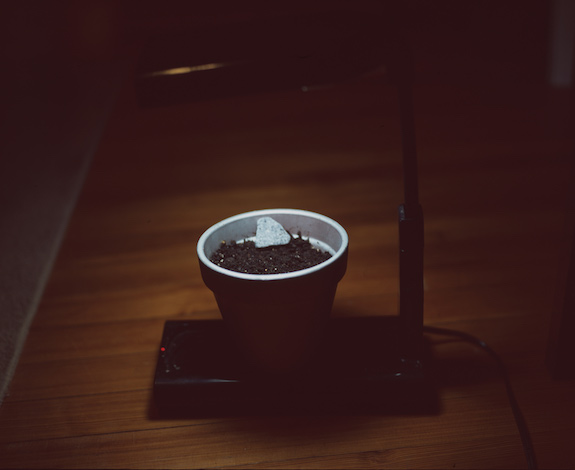 “What are we watching?”
“They’re playing volleyball,” she says. “They’re just enjoying themselves.”
Her body is planted sideways in the sand. Her elbows depress it. Everyone here has hair the color of sand.
Her bikini’s in our bucket. The straps of it flow over the rim, like a diseased vine. Pale paths crisscross her back.
“Would you like me to get you a water?” I ask her. “A beach towel?”
The bland chests of the men show sand.
“They’re just playing for fun,” she says. “See.”

With her teal two-piece balled on the couch, she pours the sand out of her shoes. She rubs between her toes as if she’s waxing a violin bow.
“What do you want for dinner?” I ask.
The brittle linguine is exhausted. No one is volunteering to boil water tonight.
“You should’ve done that there,” I say.
“How about Chinese,” she says. “When’s the last time we ordered Chinese?”
Her vagina smells of cigarettes. Her armpits of hospitals.
“Order us Chinese while I take a shower.”

At the kitchen table, I drop a dumpling onto my crotch. Her lips are sauced. The teal two-piece is still visible on the couch behind her. The dumpling rolls off my lap, onto the floor.
“Your knees are red,” I tell her.
“Wipe it,” she says. “Wipe it before you eat it.”
She clicks her chopsticks together like heels, but this is our home.

When I return to the living room, she’s watching the men on the beach on TV.
“What are you watching?” I ask her.
“Where were you?”
“What is this?” I say. I sit down next to her, on the couch, her bikini between us.
The men on the TV look like the men on the beach except they’re lying naked in the sand. No one’s saying anything and the men are just lying there.
“Is it on mute? No one’s talking.”
“Why don’t you take off your bathing suit?” she says. “You’re going to give yourself a rash.”
The men on the beach reach for each other, while seagulls and the hulls of boats drift high and low.
On the circumcised penises, the skin is like pantyhose.
I flap the damp bikini on the arm of the couch.
“Oh, I know what this is,” I say. “The man in the middle—he’s stranded.” I continue flapping the bikini. “The other men are supposed to be from here. The man in the middle has to do things if he wants to catch the next boat.”
“Which man? You have chili oil on your lap. Take off your bathing suit.”
I close my fists on each piece of bikini, like a magician palming doves. “To the man at the end of the row, the man who’s leaning over, he’ll say, ‘Take off your bathing suit. Take it off!’ But in his language. But they don’t speak his language.”

There’s either sand on me or the grains of it are inside of her.
“What’s wrong?” she says.
“Nothing.”
“Why did you stop?”
From ourselves, the bedding has plaqued. The unhospitalized corners bag the frame.
“Where are you going?” she asks.
It is too dark to see the parking lot on the other side of our window where the attendant, like a jelly, is preserved in his glassed booth.
“What’s wrong?” she says.
How does my asshole look from her point of view? I’m arched, fighting with a staple in the broadloom.
“Hello? Hello? What is this? Hello?”