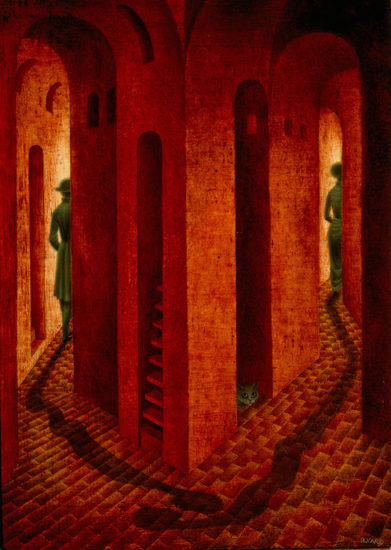 A bacterial infection was eating the flesh off my face. So, I wore a medical mask to work. When I walked into the courtroom, Old Ernie said, “You’ve got TB.” He pronounced it tay-bay and repeated himself. “Oh no, I‘m not talking to you. You’ve got TB.” I gestured for him to walk up and join me at the judge’s bench. “C’mon, Ernie, let’s ask the judge to let you out of jail.”

I rent a house to receive guests in. The guests buy me gifts, like food and magazines, except for one. She never bothers with magazines, and instead brings tiny bottles of scented oils. The skin behind her ear smells of frankincense. She steals her food. Last night, she told me she loves Valerie.

Yesterday I got lost in the sarcophagus museum. The museum admission was free. It was free to look at the dead. I went on days when I needed somewhere to be and the creperia was closed. The guard stood in front of the only entrance-slash-exit, and asked if I had seen the newest sarcophagus. It was cut from one emerald. I said I didn’t have time, but I would come back tomorrow. The guard called me by name, a name he gave me and that is not worth repeating here. Today outside of the museum, I strained to see the emerald through the window. Over the heads of couples picnicking across a long lawn, the guard waved to me.